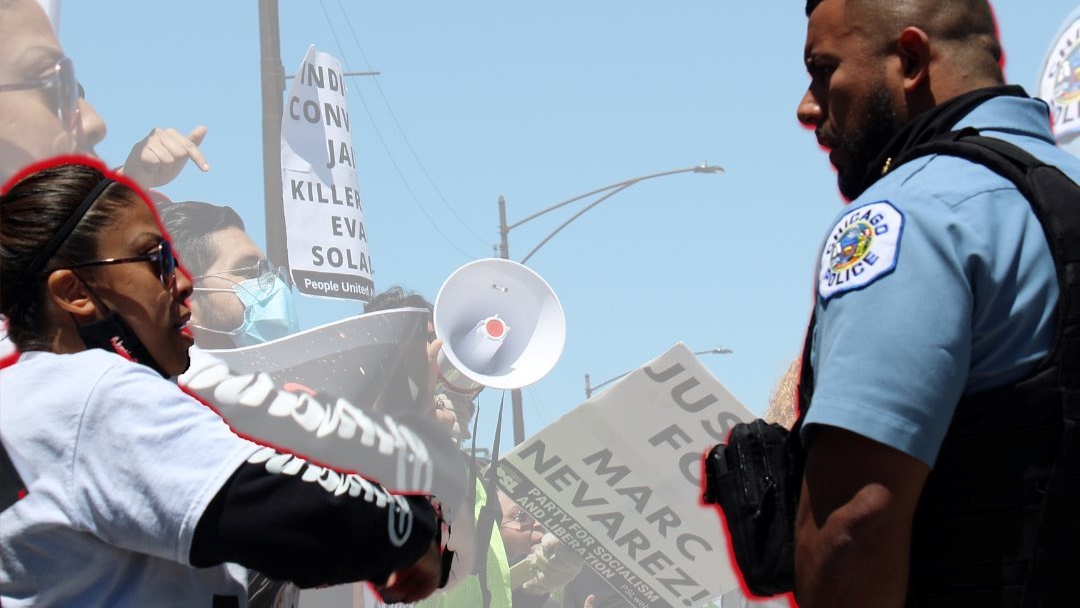 The Party for Socialism and Liberation of Chicago was honored to work with the Alvarez family to seek justice for Anthony Alvarez. He was killed by Chicago Police Officer Evan Solano on March 31, 2021. On the last day of this year’s Women’s History Month, we interviewed Anthony’s mother, Verónica Álvarez, to put in light and elevate its history.

Her fighting spirit as a woman, a fighter, an immigrant and so much more carried the fight demanding justice for Anthony with so much love and determination to win. Speaking with Anthony’s mother, it’s obvious that we shouldn’t be afraid to be on the streets because that’s how we will get justice. While justice can mean something different to different people, as Veronica points out, as mothers we know our children deserve safety in our communities.

The role of the police was never in place to protect the community, but they did protect the wealthy and their property. As the PSL stated, “it provides stability through force and intimidation, and focuses particularly on suppressing any challenge to their highly unequal and oppressive social order. Any poor or working person who has ever engaged in a serious struggle for the most basic things – a strike for better wages, housing for the homeless, better conditions for students, a protest against police brutality , etc. – immediately collides with the forces of capitalist law and the capitalist state.

Veronica and many working-class immigrant mothers have a right to defend their families and communities, whether against the police, politicians, or the wealthy capitalist class in their cities. As Veronica and the community fought for justice for Anthony, the mayor of Chicago increased the police budget by $200 million and used $281 million in COVID-19 relief money to defund the police.

Cook County State’s Attorney Kim Foxx has not announced any charges against Solano, and Chicago Police Superintendent David Brown has not yet fired Solano. Solano has taken the life of Veronica’s son and Veronica’s demands are clear: fire and prison killer Evan Solano! She didn’t stop fighting in Chicago’s Portage Park neighborhood despite the intimidation and attacks on Anthony’s memorial. The community stands with Veronica and honors her on Women’s History Month and always.

The following interview with Verónica Álvarez has been translated from Spanish.

Question: Can you tell us a bit about yourself?
To respond: My name is Verónica Álvarez, I have been both mother and father with strength and hard work. I was able to move my children forward in life. I was born and raised in Durango, Mexico. When I was 13, I emigrated to this country.

Q: What are your demands for justice for Anthony?
A: I ask and I demand justice in this investigation. I ask for transparency and that it not be filled with irregularities like the ones we have dealt with so far. Let those responsible for my son’s death be sent to prison. I only ask for justice, and not only for him [Anthony] but for those who have also suffered because of the judicial system of this country and because of the police.

Q: As you have seen the community fight back, do you think women are playing a role?
A: Honestly, our community hasn’t been as united as we would have liked. But there have been many people who have supported us like all of you, you have made us strong with your support. But I wish that if there was more of a presence in our community, more support would be needed. We need more support and less fear to go out on the streets. Nowadays, women show at every moment that they are very important in our community. Day after day, we see that women are at the head of our community.

Q: Can you share what you’ve learned since fighting for Anthony’s justice?
A: I learned that in this country, sometimes justice is not the same for everyone. There is more favoritism towards the people who have the power, not towards the people, especially the people who pay their wages with our work. Also, that some people’s lives are more important than others when all should be equally important.

Q: Is there a message you want to pass on to other women and/or mothers who are fighting for justice against the police?
A: My message is that in these times we must not be frightened by this system. That we have to go out and face all adversity and not let things go the way they used to, and fight for what’s right for all.