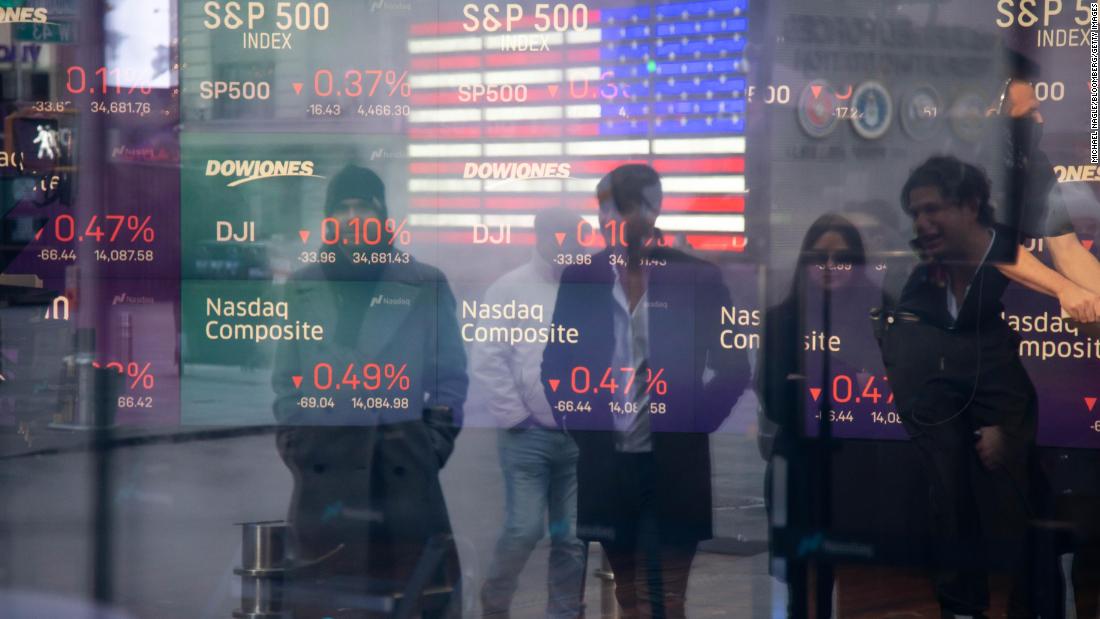 Why Biden should be worried about the stock market

“The economy and the markets are intertwined. A sharp decline in the stock market will impact economic activity. They are all in the same bed,” said Peter Boockvar, chief investment officer at Bleakley Advisory Group.

The risk is that market turbulence will spill over into the real economy, wiping out billions of dollars of household wealth.

Moreover, further losses on Wall Street threaten to undermine the already fragile confidence of consumers, who are more exposed to equities than before. If your nest egg just went down 20%, are you expecting to book that vacation? Where to buy a new car (assuming you can find one)? May be.

At the same time, tight markets can make it more difficult for companies to raise funds in capital markets that were wide open until very recently.

“A sell-off in the stock market starts to grab people’s attention and affects confidence over time,” said Ethan Harris, head of global economics at Bank of America. “The average person judges the economy by a few statistics. One of them is the Dow Jones Industrial Average.”

Another is the price of gasoline, which has started to climb again and is now only 9 cents from the seven-year high set last fall. Ditto for meat prices, which have jumped in recent months.

It is true that the fortunes of the wealthy are more closely tied to the stock market than the middle class, whose wealth is tied more to house values, which are soaring during Covid.

The richest 10% of U.S. households owned 88% of all company stocks and mutual funds in the third quarter of last year, according to the Federal Reserve.

Yet stocks represent a larger portion of the average American’s net worth than ever before.

“Unlike his predecessor, President Biden does not view the stock market as a way to judge the economy,” the White House official said, alluding to former President Donald Trump’s well-known obsession. for the Dow like the ultimate barometer of economic success.

Economists are watching closely for signs that stock market stress is infecting the broader capital markets that keep the economy going.

Yields in the junk bond market started to climb. A spike would make it more expensive or impractical for indebted companies to refinance their debt. And that would have a real and immediate economic impact.

Markets have been “quite complacent”

The good news is that stocks have not yet fallen enough to alarm economists.

The S&P 500 is flirting with a 10% correction from previous highs. Such declines are considered healthy after strong rallies.

“What would make us nervous would be a sustained 15% to 20% drop in the markets,” Bank of America’s Harris said.

The S&P 500 is far from the 20% threshold required to be considered a bear market, although the Nasdaq approached that on Monday before bouncing back.

“We have a long way to go. I don’t think it’s impossible,” Harris said. “Obviously the markets have been pretty complacent about the Fed. And the Fed has helped that by downplaying risk and portraying inflation as transitory.”

Market tension began earlier this month after the minutes from the december meeting of the fed Revealed officials are stepping up efforts to fight inflation by removing the easy money punch bowl that has boosted the stock market.

This did not sit well with investors, who have grown accustomed to unprecedented support from the Fed. Near-zero rates, combined with massive bond purchases by the Fed, forced investors to bet on risky assets like stocks. Now the reverse is happening.

“The Fed is in an impossible position, the one it put itself in,” Boockvar said. “They are the architects of this relationship. Now they have to deal with the so-called breakup.”

Rising tensions between Russia and Ukraine have only added to the stress on Wall Street.

Why the Fed is not panicking

Fed officials, gathered for the regular policy meeting scheduled for this week, are unlikely to panic about market turbulence. At least not yet.

Mark Zandi, chief economist at Moody’s Analytics, said the market pullback is a feature, not a bug, of the Fed’s shift to inflation-fighting mode.

“So far, I consider it therapeutic,” Zandi told CNN. “The Federal Reserve wants and needs the economy to cool down or it will go beyond full employment and inflation will become a persistent problem.”

Keep in mind that the Fed regularly speeds up and slows down the real economy largely by influencing financial markets. Lower rates support growth by facilitating borrowing and boosting risky assets. And vice versa.

Despite recent losses, markets remain significantly higher during the Covid era. Even at Monday’s intraday low of 4,222, the S&P 500 was trading 93% above its March 2020 low when the country began to shut down.

Of course, stocks cannot go up indefinitely. A recalibration makes sense given the change in Fed policy.

“The market got ahead of itself. It was overvalued, bordering on scum,” Zandi said. “As rates rise, bubbles appear.” But he added that a 20-25% decline in stocks would become more problematic for the real economy.

“It could cause damage that you don’t want to see,” Zandi added. “It’s tricky because the market can take on a life of its own.”