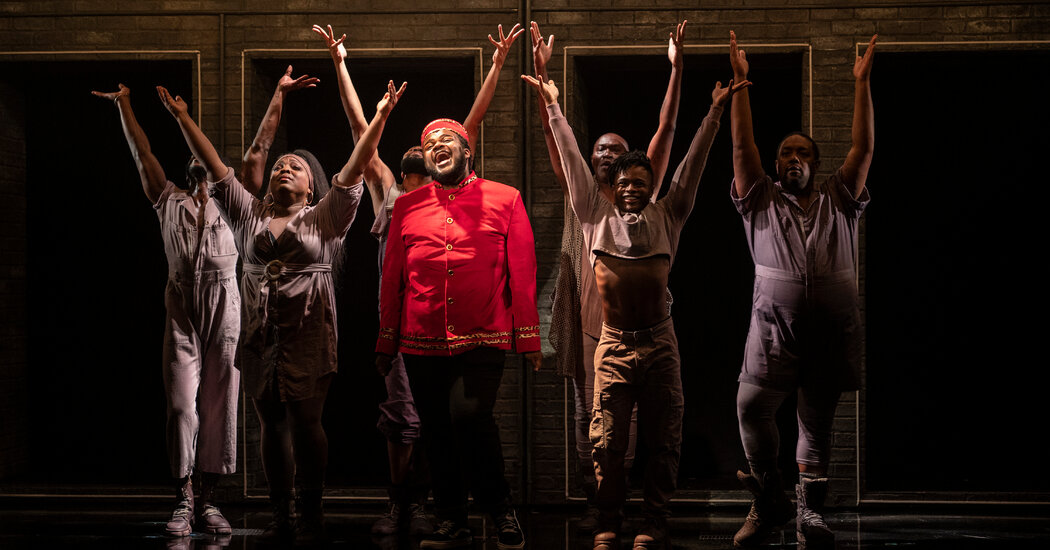 What to see and experience in New York this spring

‘CYRANO DE BERGERAC’ There is no shortage of variations on Edmond Rostand’s 19th century play “Cyrano de Bergerac”, in which the brilliant but big-nosed Cyrano writes beautiful love poems that his handsome but – let’s say less brilliant – comrade Christian passes on for his own. to impress Roxane, a woman whom Cyrano himself loves. Next is the Jamie Lloyd Company’s “Cyrano de Bergerac,” adapted by Martin Crimp and directed by Lloyd, which will come to Brooklyn after a critically acclaimed tour in London. It’s a slick, modern version, with Cyrano using rap and spoken word as a means of seduction. As Cyrano, James McAvoy, who often seems to alter his very foundations – his voice and his mannerisms, his energy, his entire physical presence – for a role. Maya Phillips
Previews begin April 5; opens April 14 at the Harvey Theatre, Brooklyn Academy of Music.

‘A CASE FOR THE EXISTENCE OF GOD’ Samuel D. Hunter built a rich body of work from fertile ground: the Idaho landscapes of his youth. His deceptively quiet pieces (“Lewiston/Clarkston”, “A Bright New Boise”, “Greater Clements”) explore faith, desire, sex and loss, in dialogue tuned to the rhythms of ordinary speech. The MacArthur Foundation recognized her ability to create “dramas that explore the human capacity for empathy and confront the socially isolating aspects of contemporary life across the American landscape.” This new play, directed by David Cromer, is again set in Idaho – and is perhaps the most intimate he has written. He has only two characters, men who struggle to understand what the world owes them and does not owe them. Although Hunter often prefers characters from what he calls “the losing end of American life,” he promised that this new play brings hope. ALEXIS SOLOSK
Previews begin April 12; opens May 2 at the Signature Theater in Manhattan.

‘WISH YOU WERE HERE’ The vagaries of postponements and rescheduling now offer us two almost simultaneous opportunities to discover the world of Sanaz Toossi, a young first-generation Iranian-American playwright from Orange County, California. Following on from “English” (at the Atlantic Theater Company), which looks at a small group of Iranians preparing for the English as a Foreign Language test, “Wish You Were Here” follows five young women in Karaj, a suburb from Tehran. (Actress Marjan Neshat appears in both shows.) They are around 20 years old when the play begins, in 1978, and we stay with them until 1991 as they navigate not only their friendship, but also their sense of belonging and belonging. A revolution unfolds, followed by a war with Iraq; life-changing decisions have to be made. Toossi reunites with Gaye Taylor Upchurch, who directed last year’s audio version for Williamsburg Theater Festival and Audible. ELIZABETH VINCENTELLI
Previews begin April 13; opens May 2 at Playwrights Horizons, Manhattan.

‘WEDDING BAND’ Alice Childress was a force to be reckoned with in theater, even if she didn’t always get her due. After all, she would have been Broadway’s first black playwright had she not refused to compromise on her work. It would be the first was his play “Trouble in Mind,” which finally premiered on Broadway last fall. How lucky we are to have his sequel to “Trouble,” “Wedding Band,” a rarely produced play about an illicit interracial relationship in the South during World War I. Awoye Timpo directs this, only the second New York production, with modern racial politics – including the Black Lives Matter movement – ​​as the issue in mind. Maya Phillips
Previews begin April 23; opens May 1 at the Polonsky Shakespeare Center, Theater for a New Audience, Brooklyn.

‘THE WETTER’ Sorry, “Urinetown,” you’re not the only musical about a certain bodily function anymore. Subtitled “Stories of Redemption, Courage, and Wee,” Sarah Silverman’s 2010 memoir is candid, vulnerable, and, of course, brutally funny. Chances are those qualities are present in this musical adaptation, since Silverman herself wrote the book with playwright Joshua Harmon (“Prayer for the French Republic”), as well as the lyrics, with composer Adam Schlesinger. . The show is bound to be bittersweet: Schlesinger, who is best known for his scores for Broadway’s “Cry-Baby” and the TV series “Crazy Ex-Girlfriend,” died of complications from coronavirus in April 2020, at around the time “The Bedwetter” was originally slated to premiere. ELIZABETH VINCENTELLI
Previews begin April 30; opens May 23 at the Linda Gross Theatre, Atlantic Theater Company.

Cupid catches up with the capital markets