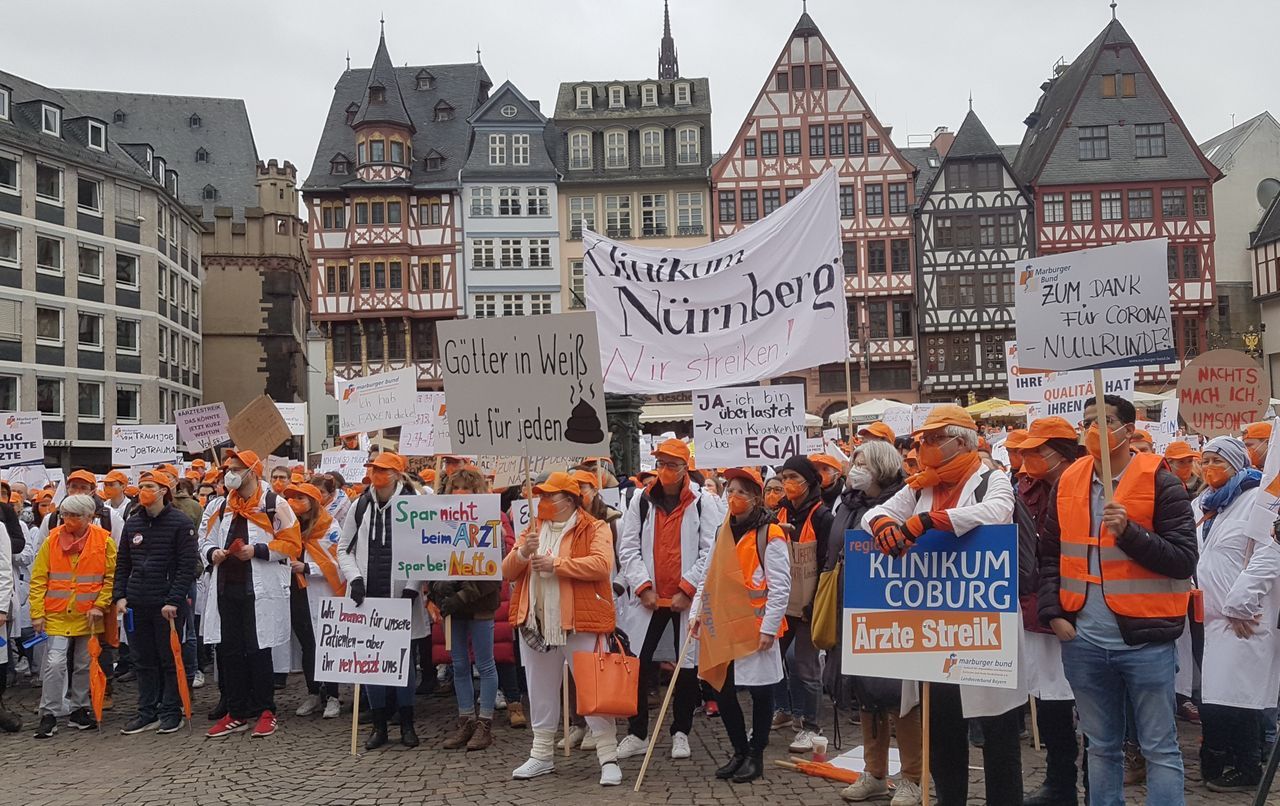 Warning strike by hospital doctors in Germany: “It’s modern slavery, nothing else”

Tens of thousands of doctors drew attention to their precarious situation on Thursday with a nationwide warning strike. About 4,000 people took part in the central rally on Frankfurt’s Römerberg. Nearly 500 municipal hospitals across Germany were on strike, except for Hamburg and Berlin.

The doctors’ warning strike reveals a stark contradiction. Thousands of doctors have made it clear that after two years of the pandemic, they are working to their limit and are not prepared to continue like this. They are calling for fundamental changes in a healthcare system that is itself sick and increasingly going to dogs.

However, it is clear that this is not the fight their union, the Marburger Bund, is fighting. The Marburger Bund is a conservative professional organization. He refuses to fight for fundamental changes to the dire conditions in hospitals and the broader health care system alongside other sections of the working class. On the contrary, he is trying to settle the conflict with the municipal bosses as quickly as possible.

The conditions facing healthcare workers are part of a wider destruction of wages and working conditions that is impacting nurseries and schools, aviation, basic industry and virtually everyone else. sectors. To wage an effective struggle, physicians must break out of the shackles imposed by unions and connect with workers in federal, local and state governments.

Like nurses, teachers, bus drivers and autoworkers, doctors must create independent rank-and-file committees against the ruling class’s ‘profit before life’ policy. These committees should reach out to other sections of workers to achieve the broadest possible mobilization in defense of health care. Workers must fight for a health care system in which it will be possible to work in a humane, safe, reasonable, healthy way and using advanced science and technology.

Posters carried by participants in the Frankfurt protest bore witness to the enormous anger felt by doctors over conditions that have worsened dramatically over the two years of the pandemic. A poster read: “To the hospital: exhausted and badly paid! Others read: “Doctors fight back against the 70-hour week”, “Work until you drop”, “You are wearing us out”, “Work-work balance? “, “Fair registration of hours: that’s enough! “, “Work up to the doctor’s drops” or: “Without the health of the doctors, no healthy patients”.

Other slogans were: “Nobody asks for champagne, just 2 weekends off”, “Yes, I’m overworked, the hospital doesn’t care” or: “…and who will take care of you during the next pandemic? !”

A young couple, Waleed and Nisreen, pointed out: “For us, the working conditions are the most important. We need to be healthy ourselves to be able to take care of people,” Waleed explained. “Nisreen is going to have a baby now, and we are both doctors and we wonder how we are going to do it. As a person and as a doctor, how do we continue? Nisreen pointed out that it was simply impossible for young parents to work three weekends a month. She also said she was afraid of contracting the coronavirus.

“Medical workers are the heart pillars of society,” Waleed continued. “For me, the salary grid is just unfair, if you take into account the training and compare us to other professions for a change.” But the most important thing for both of them, he says, was to see a rapid improvement in working conditions: “The situation has gotten worse in the last two years. Doctors are treated so badly – ​​something just has to change.

Hanno from Braunschweig explained that the doctors in the municipal hospitals were mainly concerned with a clear limitation of night duties, on-call duty and rest periods. “We demand fair working conditions,” Hanno explained. “It must be guaranteed that each of us has at least two weekends off per month.”

Recently, a survey of 3,300 doctors by the Marburger Bund found that workload had increased significantly for 71% of respondents during the pandemic. Ninety-one percent of clinicians regularly felt burnt out from their work; 31% said this was “always” the case, and 60% said it was “increasingly” the case.

“We are concerned about our working conditions,” said Kent, who had come with a group of colleagues from Bremen. “They are so bad that we hardly get any new recruits to hospitals. When I am on weekend duty, I work from Friday morning to Monday morning. I’m on call then, but for me that often means working to the end.

His colleague Ekhard explains: “Employers don’t give us rest periods. If it was not possible to rest during the night and we return home after working all night, this is deducted from our salary. He added: “The medical profession is the only profession where you earn fewer hours through overtime, which you then have to work on weekends. It’s modern slavery, nothing more.

On the coronavirus pandemic, doctors reported: “Right now we have extremely high absenteeism. A third of the staff is missing because of the Omicron variant. They all have families; they have children at home who cannot avoid being infected at school. But at the hospital, the numbers are so thin that there is no cushion. Then the beds are closed, the services are closed and the treatments are cancelled. »

Since October 14, 2021, the Marburger Bund has been negotiating with the VKA on the working conditions of almost 60,000 doctors in municipal hospitals. No progress has been made in four rounds of negotiations and two exploratory talks. VKA chief negotiator Wolfgang Heyl described the financial costs as “unbearable”.

However, the demands raised by the Marburger Bund in no way respond to the explosive situation. It only asks for reliable rest periods, a general limitation of on-call duty to a maximum of twelve on-call duty and two guaranteed rest weekends per month. In addition, he is asking for a 5.5% increase in wages under conditions where inflation had already reached 7.3% in March. The 2020 contract already provides for two free weekends, but this does not reflect reality.

Susanne Johna, national chairwoman of the Marburger Bund, criticized the VKA’s “refusal attitude” in Frankfurt. But that’s just a cover. In the fact that the union is quite ready to make a rotten deal with the municipal bosses. Moreover, the Marburger Bund strives to maintain the isolation of doctors and is fundamentally reluctant to extend the struggle to other sections of workers.

When the contract was terminated on September 30, 2021, thousands of nurses at Berlin’s Charité and Vivantes hospitals went on strike last fall. Across the country, workers from other parts of the public sector have repeatedly taken to the streets to fight against exploitation and wage theft. But in this situation, the Marburger Bund refused to mobilize doctors alongside their colleagues.

At the end of November, the Verdi (public service), GEW (education) and IG BAU (construction) unions agreed to a dirty sell-out that condemned more than a million workers across the country to forgo any wage increases during 14 months, until December 1, 2022 (!).

The WSWS wrote: “The unions have deliberately isolated the strikes in hospitals, schools and government services. The protests they organized were token events aimed solely at venting. Union leaderships are in cahoots with employers, are often members of the same political parties, and regularly trade well-paid positions in the union bureaucracy for high-level positions in government, and vice versa. The COVID-19 pandemic has revealed as never before the subordination of trade unions to the capitalist pursuit of profits at the expense of any consideration for public welfare.

The same goes for the Marburger Bund. We urge healthcare workers who want to fight to contact the WSWS to create a grassroots committee at your workplace.

Sign up for the WSWS newsletter for healthcare workers!