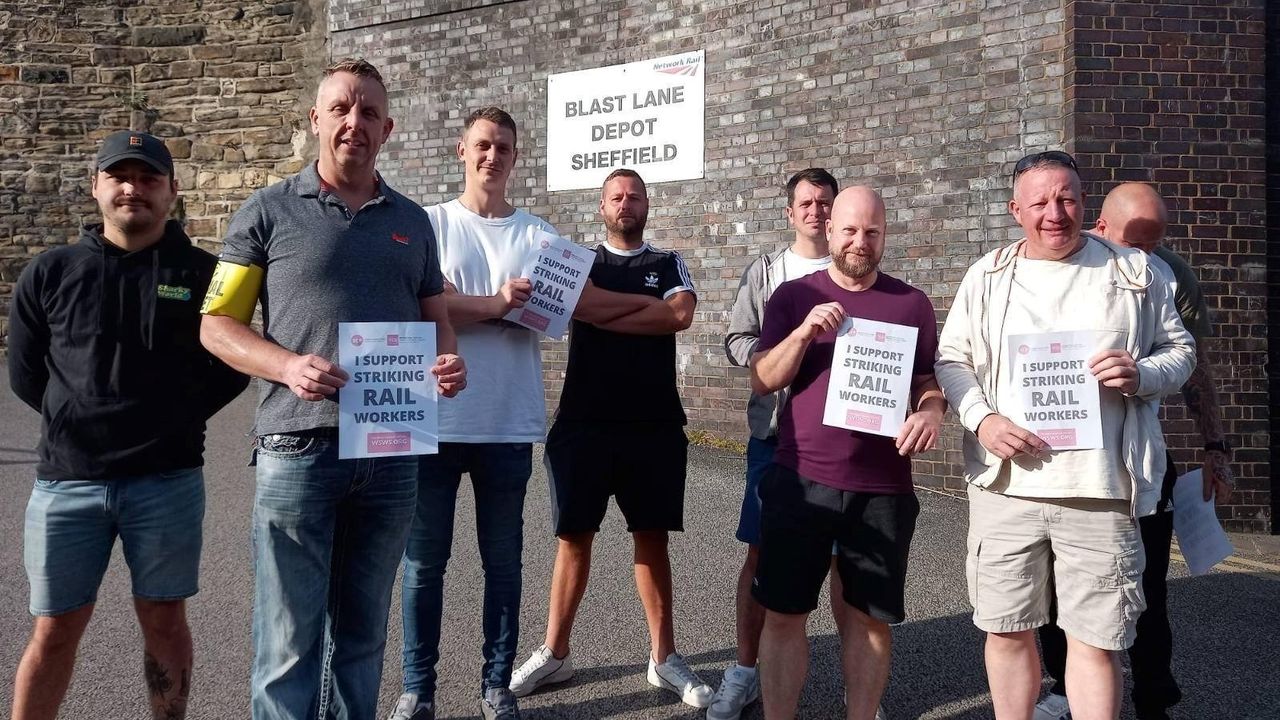 Hundreds of contractors at the Ineos Grangemouth petrochemical plant in Scotland staged a wildcat strike over wages on Wednesday, blocking access to the refinery for three hours after walking out at 7am.

Workers employed by several contractors opposed a 2.5% wage increase for this year and the same figure for next year. This is a de facto 10% wage cut, with inflation expected to hit 13% within weeks.

The wild action comes as Amazon warehouse and distribution workers continue a series of nationwide work stoppages and protests that began last week in opposition to a pay rise from 35 to 50 pence an hour which hit sites in Tilbury, Coventry, Rugeley, Bristol, Coalville, Dartford, Belvedere, Hemel Hempstead and Chesterfield.

Ahead of a new round of strikes this week in the railways, new strikes in other key sectors have been announced.

In what could be one of the most economically devastating strikes, 1,900 dockworkers at the Felixstowe Dock and Railway Company have to stop their tools for eight days between August 21 and 29, rejecting a bid for 7% more a bonus of £500. Felixstowe is Britain’s busiest container port, handling 48% of UK container traffic and a strike would affect national supply chains, logistics and transport sectors and international maritime trade.

Two new days of strike action by 40,000 railway workers against Network Rail and more than a dozen railway companies called by the RMT (Rail, Maritime and Transport) union are scheduled for August 18 and 20. 2,500 members of the Transport Employees Association, including controllers and electrical control room operators employed by Network Rail and members of Unite will also strike on those days.

10,000 London Underground RMT workers are due to stage a 24-hour strike over pensions on August 19, joined by 400 London Overground workers employed by Arriva Rail London.

More than 1,600 London United bus drivers from the Unite union are also set to strike on August 19 and 20 against a pay rise of just 3.6% in 2022 and 4.2% next year. A strike by Arriva North West bus workers, members of Unite, is in its third week.

On Monday, the Communication Workers Union announced four days of pay strikes by more than 115,000 UK postal workers to be held on August 26-31 and September 8-9.

Criminal justice lawyers have staged numerous shutdowns over seven weeks, including a recent five-day shutdown, and are being elected for an unbroken walkout in Crown Courts in England and Wales from September 5.

The University and College Union (UCU) is also launching a nationwide ballot across the higher education (HE) sector in favor of a September term strike in what it called the “largest pay, conditions and pensions campaign in British higher education history”. .” UCU represents over 84,000 higher education workers.

A general offensive against the employers and the conservative government is developing, despite all the efforts of the unions to keep aside a growing number of official strikes. It is propelled by a cost of living crisis that is pushing millions of workers into social catastrophe. The rise in strikes and polls in Britain is part of an international movement propelled by the same issues and follows general strikes earlier this year in Greece, Italy and Belgium. This week, Ryanair cabin crew in Spain announced that after several days of industrial action in July, they would strike for the next five months. Walkouts in the dispute over pay and leave entitlements will take place weekly from Monday to Thursday.

This week it was predicted that a typical energy bill for UK households would be £4,266 a year from January, a staggering increase from the £1,277 it hit in April this year. “Consumer champion” Martin Lewis warned that “millions of households simply won’t be able to afford it… We are facing a life-threatening financial emergency here”.

The ongoing contest to replace Boris Johnson as party leader between Liz Truss and Rishi Sunak has confirmed that the government is unresponsive to all demands to ease the crisis and is preparing more repressionno concessions.

Last month he passed a law allowing temporary workers to replace strikers and has already quadrupled the fine for “unlawful strike” to £1million. It intends to ban strikes by different unions at the same workplace within a specified period, impose an absolute limit of six pickets at critical national infrastructure points, ban “intimidating language ” in strike ballots, to delay strikes with a “right of reply” deadline for the employer, to repeal the law allowing unions to use a strike mandate at any time during the next six months and to impose a mandatory cooling-off period after each strike, up to 60 days.

Confronting the Conservatives’ class war offensive is not possible without working people also dealing with the Labor Party and their partners in the union bureaucracy.

As struggles erupt that would involve an estimated three million workers if mobilized collectively, union leaders have calibrated every organized or planned strike to ensure no united offensive takes place. With very few exceptions, workers go on strike for a few days without coordinating anything.

Asked this week if he favored a general strike, RMT leader Mick Lynch again insisted he and other striking union leaders lacked the power to do so. It was up to “business” to “play its part” by “giving a raise in pay to the British worker, it’s a fundamental”. But if that hasn’t happened, then the Trades Union Congress “can call a general strike, not me, if they call it, we’ll support it, absolutely…”

Behind this screen of extremely polite militant rhetoric, which leaves the employers and the TUC firmly in the driver’s seat, union leaders such as Lynch, Dave Ward of the CWU and Sharon Graham of Unite shield the other great anti-working class conspirator, Labour, of challenge.

By constantly insisting that Labor leader Sir Keir Starmer “come out of the fence” and support the workers in struggle, they are desperately trying to conceal that Labor is a party of big business working in tandem with the Tories. It is equally ruthless in its determination to suppress a working class fightback. Starmer has even banned shadow ministers from attending picket lines, declaring absolute hostility to strikes and even the most minimal social reforms he denounces as “magic money tree” economics.

To advance their struggles, workers must wage a combined industrial and political offensive against the ruling class and all of its political representatives.

The Socialist Equality Party calls on workers to create rank-and-file committees in every workplace and community to defeat union sabotage and begin the process of unifying their struggles in a general strike. Only such a unified movement can defeat a government that is preparing to use all the might of the state against the working class.

The PES also calls on workers to demand immediate general elections. Our aim is not to harbor illusions about a non-existent parliamentary response to the plight of workers, nor to echo union claims that Labour, even under Starmer, is a lesser evil than the Tories. An election would end the de facto Conservative-Labour coalition and provide an opening for the working class to mount a joint political-industrial struggle against the two parties and build support for a socialist alternative to capitalism.

Workers must take their own political destiny into their own hands. They must wage a political struggle for socialism against all Westminster conspirators who are now plotting all-out war against Russia and China and allowing the pandemic to run wild while destroying living standards and eviscerating democratic rights.

Sign up for the International Amazon Workers Voice newsletter

For more information, strategy and updates, sign up below.