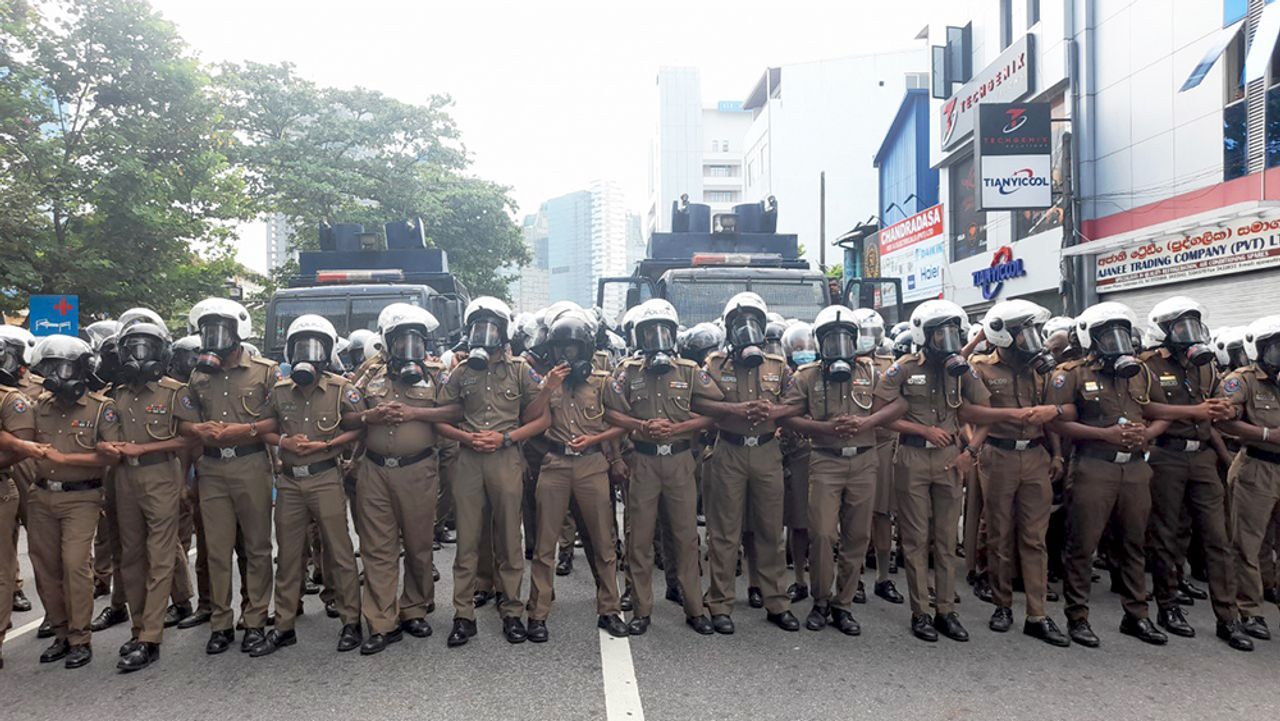 ‘Through this brutality, the Sri Lankan government is imposing the burdens of the IMF on the people’: Support grows for SEP meeting against state repression

The Socialist Equality Party (Sri Lanka) has received many comments supporting the online meeting it is organizing this Sunday with the International Youth and Students for Social Equality (IYSSE): “Stop the crackdown on anti-government protesters! Free all political prisoners!

The newly installed “interim” government of President Ranil Wickremesinghe launched a brutal assault on students and activists during mass anti-government protests that rocked the island from late March to mid-July and ousted Gotabaya Rajapakse from power.

Security forces savagely attacked protesters and made mass arrests under the draconian Prevention of Terrorism Act. More than a thousand detainees are still held in mass internment camps.

State repression aims to intimidate the working class as the government implements a program of brutal austerity measures dictated by the IMF. Sunday’s meeting is part of the SEP’s struggle to mobilize the working class as an independent political force, rallying the rural masses behind it, to defend democratic rights, oppose austerity and, through building of a network of workplace and neighborhood committees, for the basis of the establishment of workers’ power.

The political program put forward by the SEP and the IYSSE won wide support.

Thushini Kodagoda, undergraduate student at the Faculty of Technology of the University of Colombo said, “I cannot accept this kind of brutality from any government. Masses of people have participated in recent struggles for real reasons. Soaring fuel and food prices and shortages have really affected their lives. That’s why we took to the streets. Now the government is arresting people who have very reasonably raised the issues they are facing.

“Through this brutality, this escalation of state repression, the government is imposing the burdens of the IMF on the people. They want to be able to put any burden on our backs. Why should we accept this?

After SEP supporters campaigning for the meeting explained that a revolutionary party must be built to politically arm the masses of workers who are now coming into struggle with an internationalist program and strategy, she enjoyed the upcoming SEP meeting and said she wanted to participate.

Lohan Gunaweera, a visual artist and performer and the translator said: “It is difficult to find anyone who has not participated in one way or another in the struggles against the Rajapakse government. Therefore, government repression targeting participants in this struggle is a broader attack and threat to all working and oppressed people.

Recalling how the four-month-long popular uprising toppled the government of President Gotabhaya Rajapakse, forcing him to flee the country, Lohan said it showed “how weak the ruling class is. Therefore, this repression aimed at intimidating the working class can be identified as a sign of the weakness of the Wickremesinghe government, not of its strength.

“But the crucial question is how such an undemocratic capitalist leader as Wickremesinghe came to power after such a massive popular struggle? In the midst of this intensification of the class struggle, how did the ruling class get the chance to attack even more ferociously than before?

“I sincerely believe that we cannot organize a struggle against government repression without finding answers to these questions.

“Only the SEP and the WSWS warned the working class about this. They made it concrete that the popular struggle against Rajapakse should be waged on a socialist basis and under the leadership of the working class. Therefore, the meeting held by the SEP this Sunday is extremely important. Democratic rights can only be defended by mobilizing the strength of the working class to fight against the destructive policies of the capitalist class.

Nandana, a non-academic school worker in Puttalam district, condemned the suppression of democratic rights. “People are protesting because of the unlivable conditions. Parents face many problems. Not only can they not afford their children’s bus tickets, but they can even provide them with decent meals because of poverty and high prices.

Nandana recalled President Wickremesinghe’s statement that anti-government protesters should be punished if they do not act in accordance with the constitution. “This means that if we, as workers and poor, oppose the anti-democratic actions of the government and fight for our social rights, we should be punished! The constitution, the judiciary and the police are part of the state that defends the capitalist system and its domination,” the non-academic worker said.

He pointed out that the unions had been forced to call one-day general strikes in April and May due to the huge opposition that had developed among workers against former President Rajapakse. “They limited our struggles and betrayed us,” Nandana said. “Rajapakse has been replaced by Wickremesinghe. It intensifies repression and implements the policies of the IMF, and the unions support capitalism. That’s why workers should form action committees in every workplace to fight for our rights.

A railroad worker at Ratmalana’s workshop spoke out against the state’s attack on anti-government protesters and explained why he planned to listen to Sunday’s meeting.

The reason for this witch hunt is that “the government wants to carry out its measures without any obstacles. We must oppose arrests.

He added that his friends and colleagues at the workshop say “it is a warning for us. If we as workers also protest, we will face such harassment and intimidation.

Explaining that the dictates of the IMF would affect railway workers, he added: “Circulars have come insisting that workers over the age of 55 should retire and that all non-permanent workers should be made redundant. The government says staffing levels are “excessive”. This is an indirect warning that they are moving towards privatization and implementing a hire and fire at will policy. Repression is also a warning that if you demonstrate, you will be arrested.

Speaking of the role of unions in his shop, the worker said, “I haven’t heard anything from them. It is not a question of action to oppose repression. They didn’t even call a meeting to discuss these attacks.

He said he too had “joined the demonstrations twice at Galle Face” in the center of Colombo, the capital, then went on to observe that “even though tens of thousands of people participated in these demonstrations”, the leaders “hadn’t defined what changes were needed. “They didn’t take leadership properly.

Malaka Devapriya, an award-winning filmmaker, The director and radio playwright said, “The COVID-19 pandemic and the US war against Russia in Ukraine have created many economic and political crises around the world and in this country…

“The capitalist crisis has pushed the current government to take authoritarian measures, so there is no place for regimes based on democracy within the capitalist system. This is why the Wickremesinghe government has passed one repressive law after another. This repression victimizes a large part of political leaders, artists, workers and students.

“I accept that democratic rights can only be restored as part of a broader struggle for socialism led by the working class.” Malaka encouraged workers, intellectuals, artists and young people to attend Sunday’s SEP meeting.

Wasantha Wijesiri, development worker and cartoonist said: “The inequality we see here is not limited to Sri Lanka. The main imperialist countries, led by the United States, spend hundreds of billions on war. In turn, the working and living conditions of tens of millions of workers are devastated. While a handful of billionaires accumulate wealth, the vast majority of the working and poor in society suffer from poverty, hunger, malnutrition and pandemics.

“Even when it is clear that the capitalist government is creating such devastation, pseudo-left and middle class groups continue to pressure them, promoting reforms to this rotten capitalism. A representative of the Front Line Socialist Party of Sri Lanka, a Sri Lankan pseudo-left, addressed the United Nations Human Rights Council to complain about the repression of the Wickremesinghe government. This expresses their pro-capitalist nature.