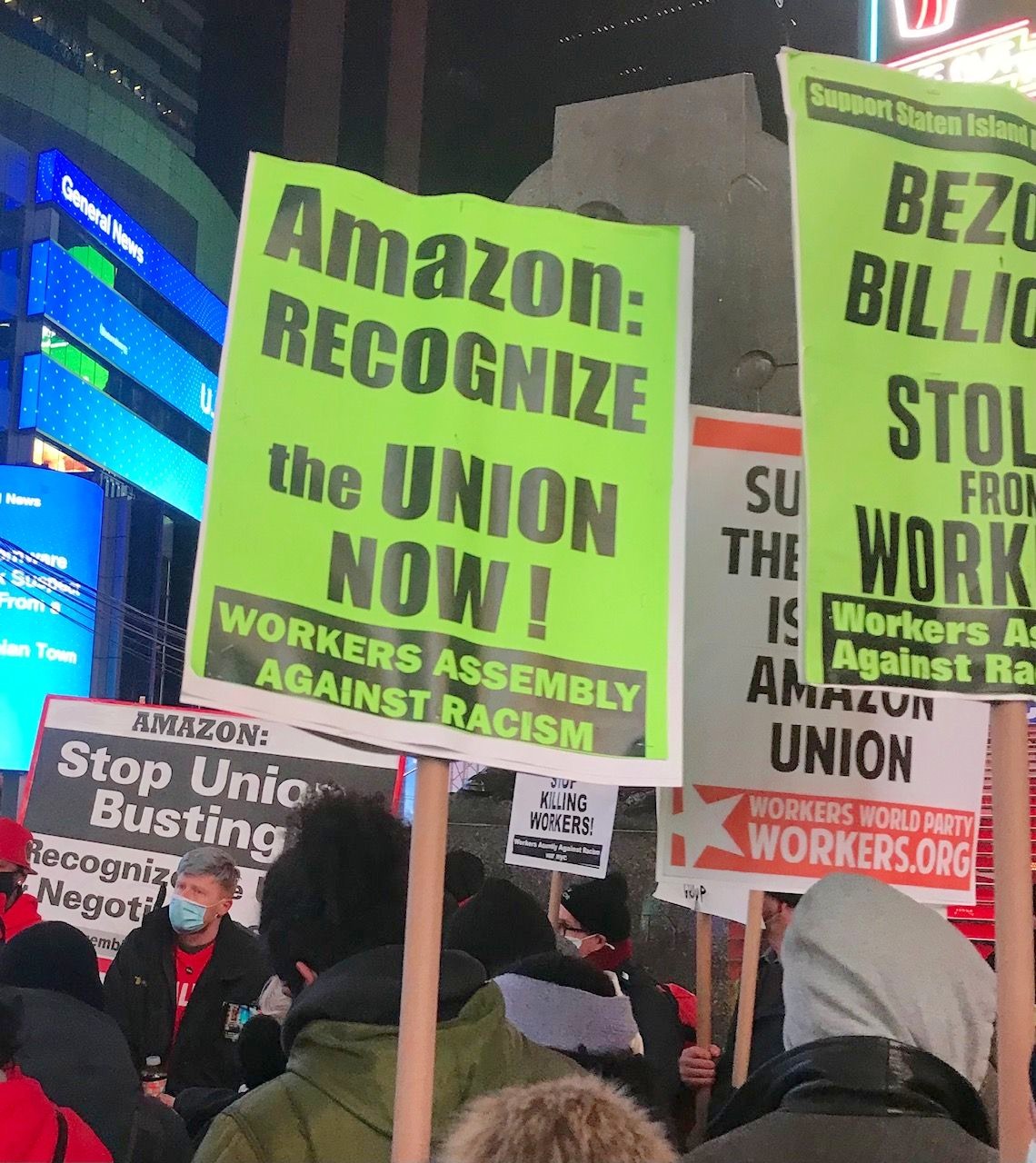 This article was written for an international year-end collection and published in French and Spanish translations on lapluma.net and tlaxcala-int.blogspot.com.

Workers at three Amazon sites have launched campaigns to form a union at the giant company that employs youuh 1 million workers in the United States alone. Workers at two Starbucks coffee shops in Buffalo, New York, have won union representation in a vote.

Other actions are planned for January 12, the birthday of Amazon’s centibillionaire top boss, Jeff Bezos, and for the the reverend dr. Martin Luther King Jr. Day (supportamazonworkers.org/jan12/)

This may seem like a small start. Yet it has already raised the hopes of millions of workers in the United States and thousands of labor activists that something big is afoot. It has raised hopes among labor organizers to reverse the decline in union membership over the past 68 years.

Some voices, among communists and trade unionists, and among corporate media watchers, have referenced the rise of the CIO industrial union in the 1930s and wondered if a new wave might be coming.

The New York Times and the Boston Globe, for example, ran feature articles on Starbucks and Amazon’s organizing campaigns with headlines and mentioned the 1930s. The Times normally confines labor news in the business section. Most of the stories focus on lost or divided strikes between rank-and-file workers and union leaders.

In the fall of 2021, unionized workers in the United States struck more often than they had in decades. In major strikes at Kellogg’s grain manufacturers and John Deere tractors and bulldozers, strikers forced their union leaders to continue strikes after reaching agreements with the bosses.

This rapid increase in the number of striking workers follows decades of declining union membership. There were heroic strikes, but almost all of them were lost by the unions.

Following an expansion of unionization from the late 1930s to the mid-1950s, almost 35% of American workers belonged to unions. Unions were particularly strong in heavy industry: steel, coal, car manufacturing, where they wrested better contracts from their world-dominant bosses.

The bosses and government first hit workers with the Taft-Hartley Act of 1947 which drastically reduced unionization and banned a number of effective strike tactics. The Cold War onslaught on the Communists drove the best political organizers out of the unions.

Then, the deindustrialization of the American economy replaced workers with machines and moved industry to low-wage regions using new methods of production. Unionized workers have retired or been permanently laid off. New jobs were often in service industries, logistics, health care and education.

The federal government carried out an all-out attack on air traffic controllers during their strike in 1980. This broke the PATCO strike, triggering a sharp decline in union strength. While heroic strikes by rank and file workers took place in the following years, few resulted in victories.

Deindustrialization accelerated after the collapse of the Soviet Union and the opening of Chinese labor to international capitalist employment. Indeed, from the 1980s to 2000, the global exploitable labor force doubled, from around 1.5 billion to 3 billion workers.

There was a vast army of surplus labor. Average wages have fallen, as has union membership. Inequalities grew rapidly.

In 2020, unionized workers made up just 10.8% of the workforce in the United States. While the United States provides an extreme example, union membership has halved or more in Japan, Europe and most imperialist countries.

The increase in strikes and organizing comes as the fourth wave of COVID-19 is hitting the Midwest and Northeast United States particularly hard. The pandemic crisis has taught workers in healthcare, education, retail and logistics that their work is “essential” – if they hadn’t known it before.

From August to November, a record number of more than 4 million workers left their jobs every month, in search of higher wages and better conditions.

As COVID-19 has slowed the overall economy, some businesses have proliferated. Amazon, with the internet sales monopoly, added 500,000 workers to its US workforce in 2021 – plus another 250,000 drivers and delivery people employed by contractors. Amazon now employs 1.3 million workers.

Amazon treats its warehouse workers like Marines in basic training. This abuse and overwork cause an enormously high turnover rate: 3% every week or about 150% every year. While this turnover requires constant hiring, management accepts it, as their brutal methods keep operations and profits high.

Amazon’s workforce is young; many workers are African American or Latinx. All are angry and more aware than ever of their class oppression. They are aware that their jobs do not pay them a living wage.

They are aware that the bosses of Amazon – and those of Starbucks, Walmart and others – will break all the rules to prevent their companies from being unionized.

They are more aware than ever that those who dominate the United States, but cannot control a virus, will not stop the global climate crisis. They experienced an unprecedented wave of tornadoes that killed workers at an Amazon warehouse in Illinois, who were forced to stay on the job in December or face disciplinary action.

Amazon workers know their big boss Bezos used the money he took from their jobs to fund a ride into the stratosphere.

The hope of organizers is that small victories at Starbucks will lead to bigger ones at Amazon and spread to the American working class faster than the pandemic. It’s a big step that hasn’t happened yet, but you can’t be a workers’ organizer, much less a revolutionary, without being an optimist.

This can have an impact on the struggle of workers around the world. Jeff Bezos might have wished to stay in the stratosphere.

Part of the labor history and economic data in this article comes from “Low Wage Capitalism – Colossus With Feet of Clay”.‘ by Fred Goldstein (World View Forum, 2008).