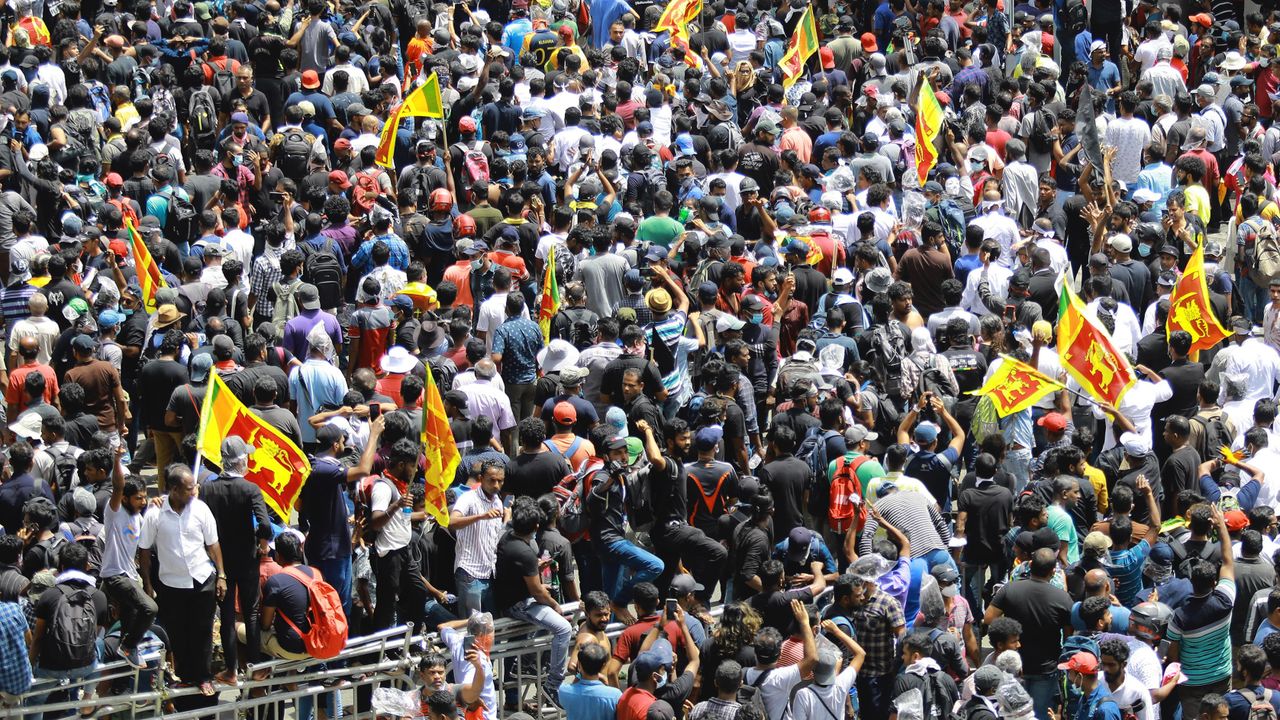 Massive popular protests in Colombo on Saturday, attended by around a million workers, youth and the rural poor, forced President Gotabhaya Rajapakse to announce he would step down next Wednesday. Having initially refused to do so, Prime Minister Ranil Wickremesinghe also said on Saturday evening that he would step down, following the formation of a “multi-party government”.

Saturday’s protests for which people traveled to Colombo from areas across the country marked three months since protests began at Galle Face Green in Colombo demanding the resignation of President Rajapakse and his government. In doing so, those who joined the mass protests on Saturday defied a curfew and police attacks.

The huge protest marks a turning point in the economic, political and social crisis in Sri Lanka, which is itself an acute expression of the global crisis of capitalism that has intensified with the COVID-19 pandemic and exacerbated by war. by proxy between the United States and NATO against Russia in Ukraine. .

The forced resignation of Rajapakse and Wickremesinghe demonstrates the immense social power of the working class, which played a central role in the popular uprising against the now three-month-old government. However, their replacement by a multi-party government will not solve any of the crucial problems facing workers, youth and rural workers. It will do nothing to end the unbearable living conditions produced by severe shortages and soaring prices of basic necessities including fuel, food, medicine and cooking gas, or the daily power cuts that last for hours.

Although Rajapakse and Wickremesinghe may leave, political and economic power will remain in the hands of the bourgeoisie. As long as bourgeois rule continues, the social crisis facing workers and rural laborers will only deepen. The opposition parties – the Samagi Jana Balawegaya (SJB), the Janatha Vimukthi Peramuna (JVP) and the Tamil National Alliance (TNA) – which are negotiating behind closed doors to form an “interim government”, have pledged to implement implemented the severe austerity measures demanded by the International Monetary Fund (IMF).

When the popular protests began, the Socialist Equality Party (SEP) issued a statement on April 7 raising key political questions for the working class: “The Socialist Equality Party squarely supports the workers’ demands: ‘ Gota must go! ‘ But what will replace it? It is not enough to demand the dismissal of Rajapakse. He is only today’s ugly face of a corrupt and reactionary presidential state system that is organized to secure the wealth and interests of the capitalist class and perpetuate the exploitation and impoverishment of workers and peasants all over the island.

Explaining what needed to be done, the SEP said: “As a key step in resolving the current political crisis, the SEP demands the immediate abolition of the executive presidency, which, with its vast autocratic powers, aims a over the heads of the working class… The SEP insists that the goal of these necessary democratic political changes, which can only be achieved through a determined struggle by the working class, the rural poor and the youth, is to bring about sets in motion a fundamental restructuring of the economy along socialist lines.”

The class interests of the workers and the rural masses are directly opposed to the IMF austerity program which will be ruthlessly implemented by any caretaker government. In a statement on Sunday, the IMF said: “We hope for a resolution of the current situation which will allow the resumption of our dialogue on an IMF-supported program.”

In addition to the tough measures already imposed, the IMF is demanding higher taxes and a widening of the tax net, massive reductions in public spending which will have a considerable impact on essential services such as education, health and subsidies for prices, and new privatizations which inevitably involve brutal cuts in jobs, wages and conditions in the public sector.

US imperialism is also nervously following events in Sri Lanka, aware that the popular uprising on the island could spark similar protests in other parts of the globe, particularly in India, where workers are facing a social crisis. similar. At the same time, he will seek to exploit the crisis to advance his position in Colombo as part of his broader efforts to prepare for war against China.

On the eve of Saturday’s protests, US Ambassador to Colombo Julie Chung appealed for calm, tweeting: “Violence is not an answer. If you are going to demonstrate, please do so peacefully. And reminding the military and police to allow peaceful protesters the space and security to do so. Chaos and force will not fix the economy or bring the political stability that Sri Lankans need right now.

However, the IMF austerity measures will only intensify the opposition of workers and rural workers and cannot be imposed democratically. The resignation of Rajapakse and Wickremesinghe and the formation of a multi-party caretaker government is a desperate attempt by the ruling class to buy time. Such a government will attempt to exhaust, divide and demoralize the opposition, paving the way for military-police repression and dictatorial forms of government.

In disturbing public comments on Saturday evening, the Chief of the Defense Staff and former army commander, General Shavendra Silva, said during a special press briefing: “The people must provide the necessary support to the armed forces and the police to maintain peace in the country”.

Sri Lankan workers must take a stark warning from the experiences of the Egyptian revolution in 2011, when Hosni Mubarak’s decades-long dictatorial regime was toppled by a popular workers’ uprising. However, independent revolutionary intervention by the working class was blocked by the role of pseudo-lefts such as the Socialist Revolutionaries (RS), which politically subordinated the opposition to the bourgeois Muslim Brotherhood.

The Muslim Brotherhood government has been unable to resolve the underlying economic and social crisis. As its support waned and in the absence of a socialist alternative, the military seized the initiative, carried out brutal repression and installed the current military dictatorship of former Mubarak general Abdel Fattah al-Sisi. As in Sri Lanka, the United States was closely involved in all these reactionary maneuvers to stabilize the bourgeois regime.

Sri Lankan workers should have no faith in a new multi-party government, whatever form it takes. They should also reject the efforts of various pseudo-left organizations, such as the Frontline Socialist Party, to promote the illusion that such a government can be pressured to improve the appalling social conditions facing working people.

The alternative for the working class is to fight for its own revolutionary socialist program, rallying the young and rural poor to bring to power a workers’ and peasants’ government, as part of a broader struggle for socialism in South Asia and internationally.

The SEP is the only party in Sri Lanka to advocate such a perspective. In line with this, the SEP categorically rejected an invitation from the SJB to participate in talks for a “multiparty agreement” to form an interim government.

In an open letter to SJB leader Sajith Premadasa, the SEP warned that, like the Rajapakse-Wickremesinghe government, “any capitalist government that replaces it will implement the International Monetary Fund (IMF) austerity program” and ” will use all existing repressive tools of the state machine to repress workers, youth and other workers who join the struggles against these attacks.”

The SEP added: “In rejecting your invitation, we are advancing a program of action for the working class to mobilize its social power and implement its own solution to the immense social and economic crisis, a solution that places human needs before the profit of investors, in opposition to the austerity program of the government and opposition parties like the SJB.

The PES called on workers and rural workers to form their own action committees, independent of all establishment parties and trade unions which have played a treacherous role in betraying and blocking strikes and demonstrations. We have outlined a series of demands around which action committees can wage a political struggle, including repudiation of all foreign debt, democratic control of production and distribution by workers, seizure of the wealth of billionaires and businesses, canceling the debts of poor farmers and small business owners, and restoring subsidies on food, fuel and fertilizer prices.

We urge workers and youth seeking a political alternative to the rotten maneuvers of capitalist politicians and their pseudo-left parasites to join our party and make it the revolutionary leadership needed for the struggles ahead.

I want to join the Socialist Equality Party