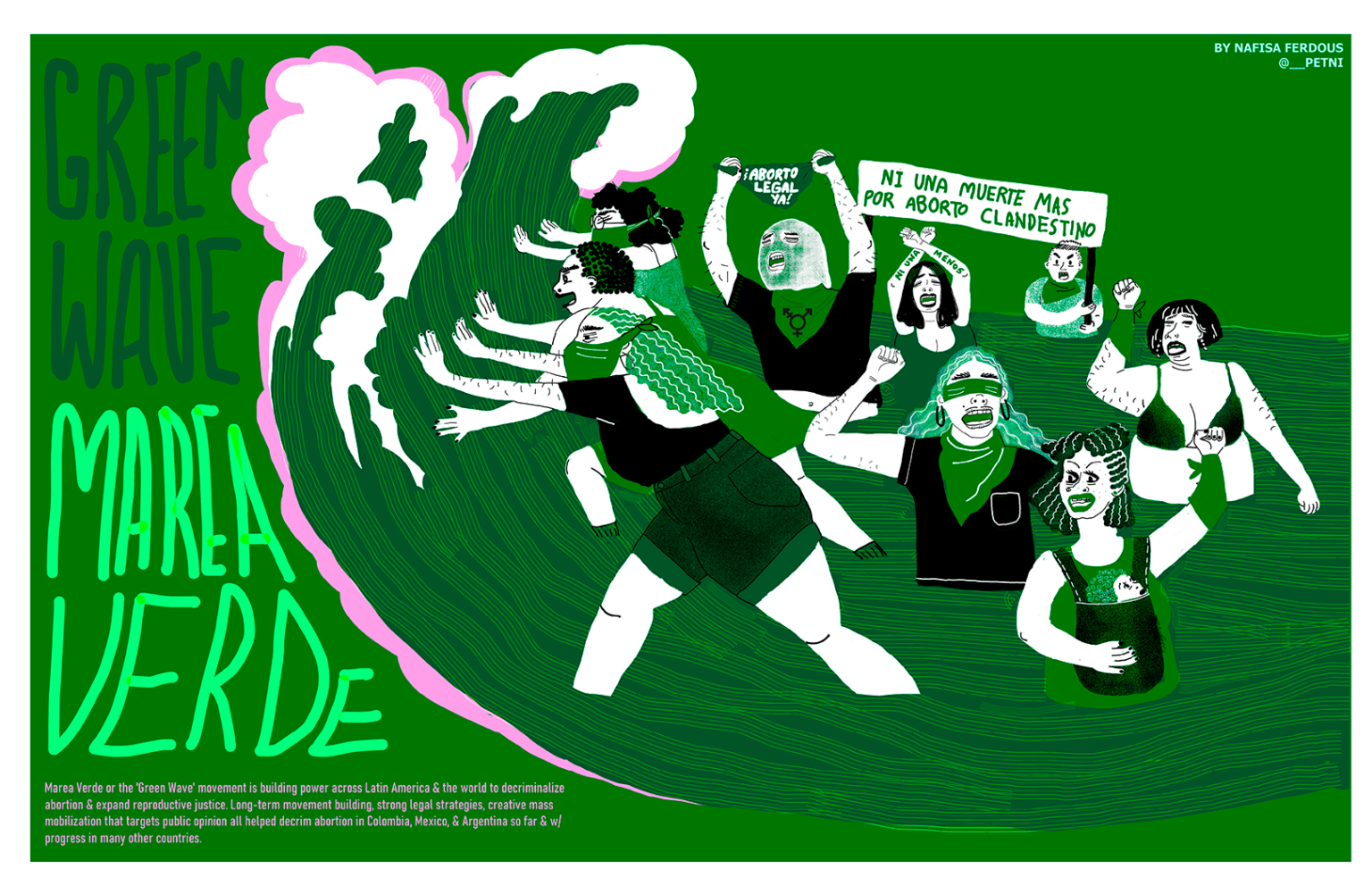 Reprinted from Breaking the Chains.

The Supreme Court’s decision to overturn Roe v. Wade in June was not only unpopular in the United States, with more than 72% opposed to the decision, but also went against the overwhelming global trend of increasing reproductive freedoms. Latin America in particular has seen some of the most inspiring examples of victories for reproductive justice in recent years, all made possible by movements organized by working-class women. The resounding success of organizing efforts in Argentina, Colombia, Mexico and other countries has inspired activists in the United States and strengthened the network of solidarity that has existed for decades among Latin American right to abortion and their American counterparts.

According to the Center for Reproductive Rights, 53 countries have enacted laws that expand access to abortion since 1994. The United States is only the fourth country to have reduced access to abortion in that same year. period, signaling a concerted push against the gradual tide sweeping through other parts of the world. In Latin America, the movement that made this trend possible is appropriately named “La Marea Verde” or “The Green Tide.” This name comes from the iconic pañuelo verde, or green handkerchief that has become the symbol of the Latin American movement for reproductive rights. The green tide has now reached the United States, with large numbers of protesters sporting the color green during abortion rights protests across the United States.

The pañuelo verde was first adopted by the National Campaign for Legal, Safe and Free Abortion in Argentina, which was founded in 2003. The Campaign presented a bill for the legalization of abortion to the Argentine Congress in 2008 ; the bill was soundly rejected but began the long road to a legal victory. Similar bills have been introduced and then defeated approximately every two years. The movement’s turning point only came with the creation of the “Ni Una Menos”, or “Not one less” movement, which rose to prominence in Argentina after a series of brutal murders of women and girls sparked nationwide protests. in the mid-2010s. One of the victims, Chiara Páez, was only 14 years old and pregnant. The massive mobilizations in the streets against sexist violence have helped popularize support for a wide range of struggles for women’s rights and have highlighted the links between the fight against femicide and the fight for reproductive rights.

These and subsequent protests linked to the Ni Una Menos and Marea Verde movements also highlight that issues such as femicide and unsafe clandestine abortions affect poor and working-class women the most. A popular chant during pro-abortion rights protests has been “Las ricas abortan, las pobres mueren” or “The rich abort, the poor die”. The movement won a tremendous victory when the Argentine Senate passed a bill legalizing abortion up to 14 weeks of pregnancy on December 30, 2020.

This victory in Argentina strengthened many other movements beyond its borders. In Mexico, abortion was unanimously decriminalized by the Supreme Court in September 2021. This followed a powerful militant movement Mexico’s own Marea Verde. For years, it has been common to see city streets turn green with pañuelos verdes across the country on September 28 (International Safe Abortion Day), March 8 (International Women’s Day) and at -of the. The decriminalization of abortion in Mexico set an important legal precedent and marked a milestone for the women’s liberation movement in Latin America’s second most populous country.

Before Mexico decriminalized abortion nationwide, networks of activists worked to provide access to safe abortions by mailing abortion medication and providing practical advice and emotional support over the phone. After the decriminalization of abortion in Mexico City in 2007, there was a long drought of legal progress. Social media has played a huge role in energizing the movement and access to medical abortions. For example, the organization Aborto Legal México created a particularly impactful Facebook group in 2018. Members of the group shared scientific information on abortion, discussed news about the movement in Argentina and enabled women to organize into coalitions based on geography. This group has also become a resource for people seeking information and support to access medical abortion. The group estimated that between 2018 and 2020 they assisted 1,000 medical abortions in Mexico and other countries like Peru, El Salvador, Honduras, Chile and Argentina.

Groups like Aborto Legal México also stand in solidarity with women in the United States as our reproductive rights are taken away. In the wake of Texas’ abortion ban, an organization called Las Libres pledged to help women who need abortions travel to Mexico for their procedures and to bring medical abortions to the states. States or to send them by post. Another organization, I Need an Abortion, based in the city of Monterrey, accompanied between five and seven women from the United States per week following the Roe decision. This group also provides virtual help after medical abortion is mailed to the homes of those who request it. There are over 30 different Mexican organizations that provide support for people who need abortions in the United States. This level of international cooperation, as well as the inspiration that the Mexican and Latin American abortion rights movements as a whole, show that we have much more to unite than to separate – we are all together in the struggle for women’s liberation. El pueblo, unido, jamás será vencido!

STRYVE FOODS, INC. : Notice of expungement or non-compliance with a continuing registration rule or standard; Transfer of Enrollment (Form 8-K)