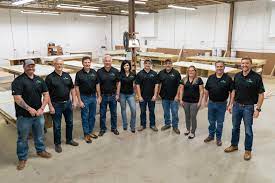 A Midland company that has become a national industry leader in the manufacture of temporary building walls is being honored as one of this year’s Michigan 50 Companies to Watch.

SwiftWall, whose customers can include anyone who needs to separate or divide space, whether on construction projects or to create new temporary workspaces, joins fellow Midland company, Creation Coffee, to receive this small business award.

SwiftWall will be recognized at an in-person awards ceremony during the 18and the annual Michigan Celebrates Small Business Awards gala on Tuesday, May 3 at the Breslin Center in East Lansing.

SwiftWall, founded in 2014 by Joe Asiala and Rick Brouwer, has come a long way in a short time.

“We are very fortunate to have two exceptional founders who came up with an idea to simplify building with an elegant, durable and reusable solution,” said Mark Johnston, Commercial Sales Manager for SwiftWall. “Their vision, passion and leadership have taken this company from a storage shed in the snow and rain to where we are today with tremendous potential for growth as we disrupt the room divider market. dry.”

Companies nominated for the Michigan 50 Companies to Watch Award must be second-stage companies. These are defined as having six to 99 full-time equivalent employees and generating $750,000 to $50 million in annual revenue or working capital from investors or grants. Companies must also be private and headquartered in Michigan.

“We are honored to be named winners of the Michigan Celebrates Small Business Award. I am extremely proud of our team members who continue to make our success possible,” said Joe Asiala, Founder and CEO of SwiftWall. “Our team is made up of imaginative dreamers and relentless innovators who are passionate about making construction easier and the lives of those we serve.”

SwiftWall has seen double-digit growth every year since 2015, with the exception of 2020, which was hit hard by pandemic shutdowns. Last year, the company rebounded to have its best year yet.

“The Michigan 50 Companies to Watch Award winners have an incredible legacy of survival and prosperity,” said Tony Stamas, president and CEO of the Midland Business Alliance, which submitted the nomination. “We feel the same way about SwiftWall. Their tremendous growth over the past few years has been impressive.

Huntington Bank and Meijer were among SwiftWalls’ earliest customers.

“We’ve supplied temporary walls to (both companies) throughout the Midwest,” Johnston said. “Shortly after, we got a national contract with JCPenney.”

Other top companies on Swiftwall’s client list are Google, Apple and Wal-Mart. Local and regional construction companies Three Rivers and Rockford, as well as national companies like Turner and Hensel Phelps, use SwiftWall to separate construction zones to keep people safe, according to Johnston.

“To see their strong focus on innovation in a variety of applications being rewarded with big deals across the country is really exciting,” Stamas said. “SwiftWall’s success is great news for the Midland community, both in terms of continued job growth and increased incomes.”

“We’re even part of Tupac Shakur’s ‘Wake Me When I’m Free’ traveling exhibit,” enthused Johnston. “Our walls are the backdrop to the lobby, known as Tupac’s heavenly space.”

“Every day our entire team proves that we have a culture where anything is possible,” Johnston said. “It’s an honor to be surrounded by such an incredible group of talented and passionate humans who love what they do and have fun doing it.”

Martin Lewis warning with days left to get £1,000 free from UK government

Many investors dumped their stocks—SEC DG