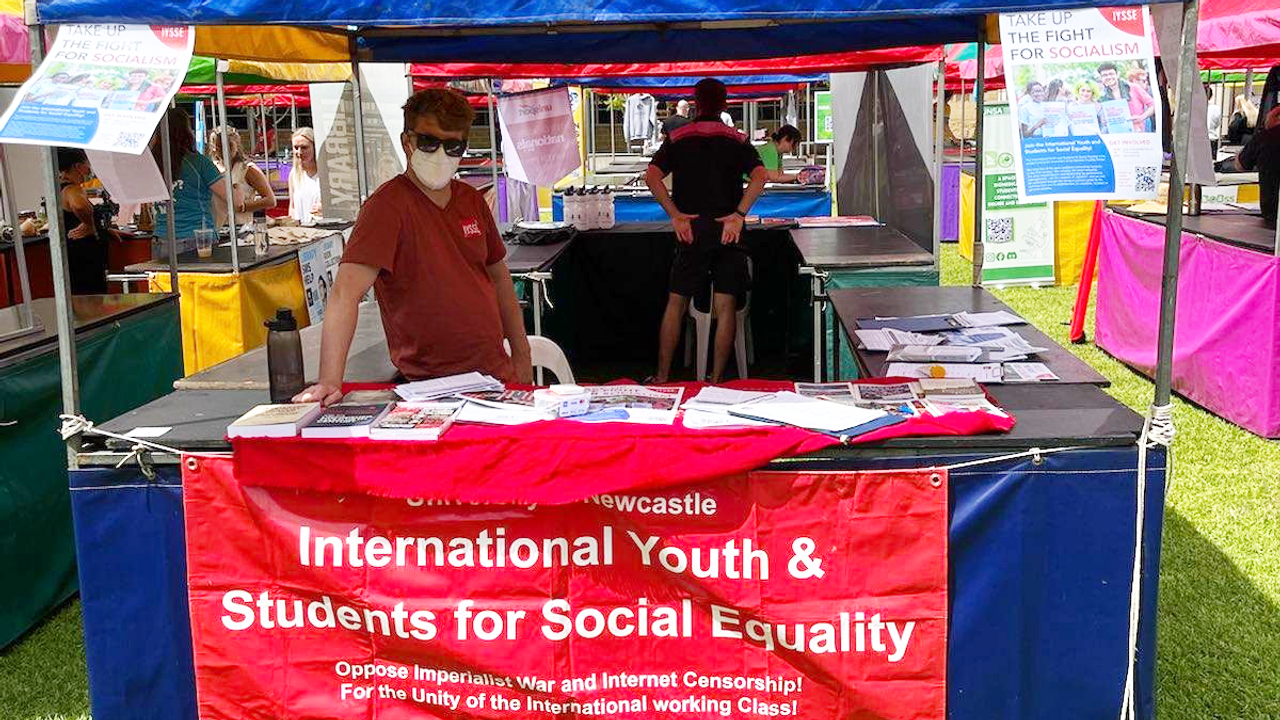 Over the past fortnight, the International Youth and Students for Social Equality (IYSSE) has campaigned at a number of orientation events where it has student clubs, including Macquarie University in Sydney , Newcastle University in the New South Wales region and Victoria University in Melbourne.

The youth and student wing of the Socialist Equality Party got a strong response to the revolutionary, socialist and internationalist perspective they put forward. The IYSSE was the only club on campus to oppose the US-led war preparations against Russia and China, which are actively supported by the Australian political establishment, and the pandemic policies of ‘let it rip “which subordinate health to private profit.

Students entering university, as young as 17 or 18, were very receptive to the perspective of the IYSSE. There was widespread opposition to the prospect of a major war, concern over the ongoing rise of Omicron, and a social crisis afflicting ever-wider layers of young people.

The IYSSE explained that all these problems were the product of capitalism, a system that was overtaken in the global crisis. Students and young people were to turn to the working class, the revolutionary force in society, and fight for socialism based on the lessons of history.

The IYSSE is organizing a major meeting, titled “As the Pandemic Rages – The Threat of World War Looms: Commit Yourselves to the Struggle Against Imperialism and for International Socialism!” We invite students and young people to register for the meeting and participate on Saturday, March 12 at 4 p.m. (AEDT). Promote it to your friends and join the IYSSE!

Below are interviews with some of the students IYSSE spoke to during recent orientation weeks.

Ronan, a 17-year-old journalism student at the University of Technology Sydney, said: “I think the response to COVID is not really driven by medical science. To some extent that is the case, but most of the time it is more determined by economics. So governments are trying to reopen the country, to reopen the borders. And I think that’s usually just to stimulate the economy so they can continue their wealthy lifestyle.

“It is not about the common good of the people. These are the people at the top, I would say politicians, wealthy billionaires. They always seem to be ahead of everyone else, even though the rest of the world is so far behind. They really should be helping to uplift their fellow human beings, but instead they exploit them for profit all the time.

As a journalism student, our reporters asked him for his opinion on the persecution and show trial of WikiLeaks publisher Julian Assange. “I think he should be free. He needs to be free because he doesn’t despise anything. He works for journalistic freedoms. So if the government is keeping national secrets, then if it’s about national security, how safe is your nation if you have to keep secrets from your own people?

“The United States has been militaristic for many, many years now. It’s amazing how much they’ve continued this trend. We should try to unite people. We shouldn’t try to kill them. It almost saddens me. It doesn’t seem fair in many ways.

Asked what he thinks he can do to solve social ills, Ronan replied, “I sincerely believe that equality and equality for the people would definitely be the right decision. So socialism is a good system, and it works, and it has been proven to work in many cases. But that doesn’t make people rich. It only evokes the whole population. So the 1%, or even less than the 1%, don’t want it. And if they don’t want it, they have the power to handle it and stop it. As a people, we must unite. We have to unite and we have to make things happen. We need action. You can talk about it all you want, but there has to be some form of action.

Asked by a reporter about the social force that would do this, he replied, “I think it’s just the working class. People who are still oppressed, everyone who is going through a hard time. If you’re at work and just being paid minimum wage by an employer who expects you to do everything you can. They expect maximum effort for minimum wage. How is that fair? This is not the case.

Asked about Trotsky and his role, Ronan said, “I did modern history in school, so I at least know a little about what he stood for. He represented the working class. He stood for the same ideals as Lenin, unlike his opposition, Stalin, who actually said he stood for Leninist ideals but was instead a totalitarian dictatorship.

yup spoke to the IYSSE at the University of Newcastle, in the regional industrial city north of Sydney.

Speaking of the ‘let it rip’ policies, he said: ‘Initially, I understood why there was the argument to make it endemic, given that the nature of COVID is very widespread. But in reality, what is happening is that a lot of workers are getting sick, which is making things worse for the economy, and things are collapsing.

“We don’t need to infect everyone. Also, there will be a lot of deaths. I think it could get to the point where it will become extremely difficult to find a vaccine against an ever-changing virus that is allowed to spread. It is unbearable. »

Asked about his interest in socialism, Youp said: “Capitalism has very obvious flaws, with the 1% getting richer at everyone else’s expense. You end up looking for an alternative, and socialism is very attractive. Having an interest in science and technology, I recognize that many scientific achievements took place in the Soviet Union. To name a few, they put the first man in space Yuri Gagarin and Pyotr Ufimtsev who invented the math behind stealth aircraft.

“I ended up spending a lot of time researching the Soviet Union and the Russian Revolution online (you could call me a Wikipedia warrior in a way!). We don’t get any education about it at school, which is weird because it’s a massive thing that’s dominated people’s lives for an entire century. It’s hugely important but I know next to nothing about it. I’m interested in hearing views others, which is why I signed up.

Ameliea psychological science student, also at Newcastle University, objected to official pandemic policies: “As soon as [Prime Minister] Scott Morrison locked us in, then as soon as the economy started to slow down it was like, ‘I don’t care if Australian citizens die, we need the economy to restart.’

“Dominic Perrottet went straight in, he was so against the Delta wave lockdown. Then when he arrived as premier of the state of New South Wales he immediately got rid of the lockdowns and then we saw infections go from hundreds a day to over 80,000 cases a day day, and have over 400,000 assets. case at some point recently. You can tell they don’t care about anyone, anything except money, capital, big business. It is so devastating to see that so many people have had to suffer because the government does not care at all.

On the US-led drive to war with Russia over Ukraine, Amelie said: “There is such a lack of effort by so many governments to be diplomatic, even in Australia. , Scott Morrison says to himself: “we will attract all our people in the embassy exit [of Ukraine], hope nothing happens. This is on top of the fact that we invest so much money in defence. You have all your citizens struggling so much they have next to no welfare we don’t get free rapid antigen tests dozens of people are dying from COVID every day here and you are putting so much wealth into the defense forces ?

When asked why she thinks governments turn to war, Amelia replied, “Money. It’s about what’s in their best economic interest.

Join the fight to defend public education! No dangerous return to schools!

From contagion to sanctions, European banks brace for Russian fallout