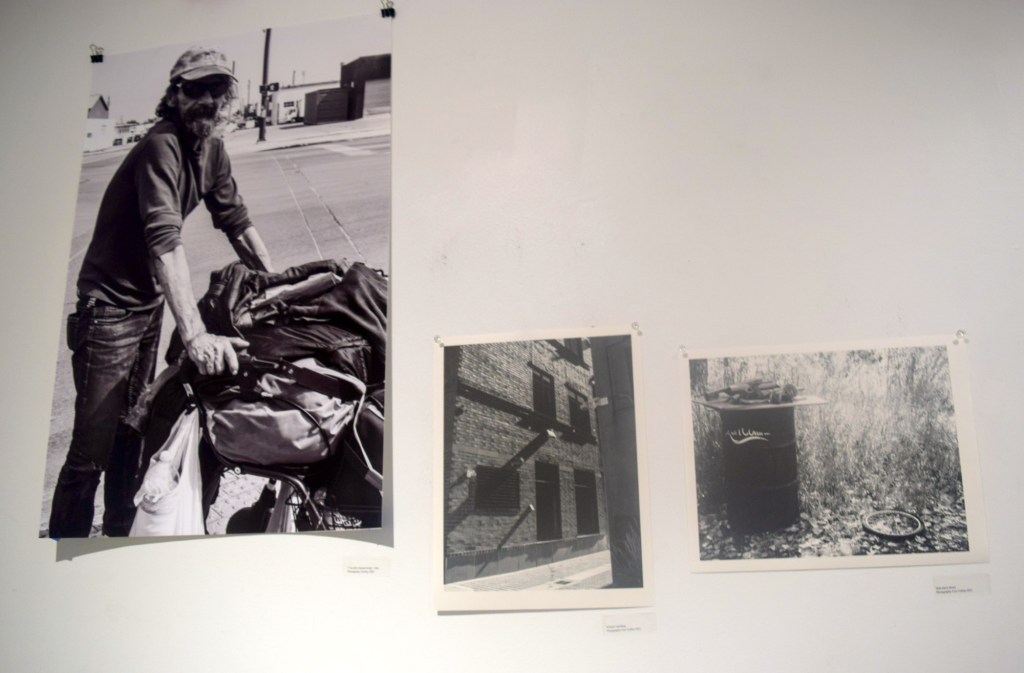 The latest exhibition from the Peter Youngers Art Gallery at Northeastern Junior College shines a light on homelessness.

“Invisible People,” an exhibition by Annabel Attridge highlighting the humanity of those left behind by late capitalism, is on view until March 10. Featuring a series of photographs that Attridge collected while working on her BFA at the University of Northern Colorado, the exhibit highlights images and portraits surrounding homelessness in Colorado.

“Intentionally provocative” is how gallery director Will Ross describes the images. “These are striking black-and-white photographs that I believe ask the viewer to contemplate the humanity of those portrayed, rather than turning away or ignoring, as may be the unfortunate and more common response.”

Attridge, an NJC graduate, is a photographer from northwest Denver. His work revolves around the everyday world that surrounds him and combines the sensibility of fine art and street art.

According to her biography, Attridge’s work is from the perspective of a neurodivergent woman in a world that was not built for people like her. The themes of his photography reflect this sentiment.

Attridge’s work has been featured regionally in over 20 national and international exhibitions, won numerous awards, and is featured in several new outlets.

Regarding this exposure, Attridge notes that more US cities have made homelessness illegal, with 53% of cities banning public sitting or lying down, a 43% increase since 2011. All these laws are being enacted, although many homeless people have no alternative. It is estimated that at least 750,000 people are homeless in the United States, while approximately 17 million homes are empty in the United States.

“This problem will only grow as more people struggle to pay their bills during a global pandemic and beyond. Poverty has become a crime while the hoarding of wealth is valued as moral. Long gone are the days when treating these capitalisms failed as less than humane. It is time for us, the working class, to stand up for those with even less power than we do and turn our contempt on those in power who perpetuate the cycle of wealth inequality. It’s time they paid their fair share of taxes or stood against the wall! said Attridge.

She points out that no one chooses to be homeless, no one decides they won’t have a home, it’s something that is too often forced upon them when tragedy strikes.

“You think any of us chose this shit? Hell no! Anyone who says people chose to be homeless is a f****** jerk,” one of the subjects of the photograph of Attridge, a man named George in Fort Collins.

The subject of another of his photos, Luran in Denver, seems to have completely given up on saying, “I’m going to die in this tent…I don’t care if my deportation is illegal, nobody cares about people like me.”

Attridge argues that the majority of Americans cannot handle a $400 emergency expense “because our social safety net has been systematically destroyed by Republicans, conservatives, and moderates. We are facing a crisis. »

But, there are things that can be done.

“We could change the laws to extend these social safety nets and admit that if we are the richest country in the world, things like health care, housing, clean water, food and education are human rights, instead of going into endless wars and spending $753.5 billion every year just on the military, a good chunk of which disappears every year with no accountability as to where she’s gone. Instead of allowing megachurches to generate record profits every year without being taxed, we could make every church and place of worship in the United States pay their fair share of taxes,” Attridge said. .

“The United States is the only country that does not ensure that all of its citizens have basic health care education and a standard of living. We are the only country limiting unionization and retaliating against low-wage workers for speaking out about the inequalities they face every day. We are the only country in the industrialized world to criticize socialism while giving bailouts, grants and tax breaks to some of the richest people in the world,” she says, asserting that “the rich are not creators of jobs are wealth hoarders and it is time that we as the working class stop fighting and stop looking down on those who live worse than us and admit that we cannot claim to be the greatest country in the world if we allow our most vulnerable to sleep outside the streets and then pretend they just needed to work harder.

Attridge will be at the gallery for an artist talk on Wednesday, March 2 starting at 6 p.m. To learn more about her work, visit her website at www.annabelattridgephotography.com.

green bonds | Budget 2022: Sovereign green bonds a boost for the green economy. After that ?