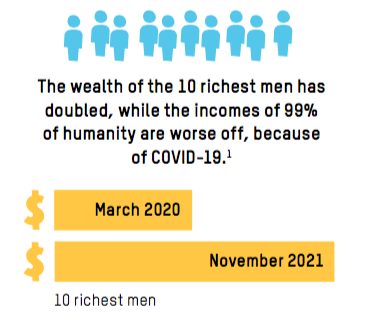 Inequality fueled the pandemic. Windfall taxes could help end it

I remember the early days of the pandemic. There was a sense of unity and an awareness that our mutual risk would be overcome through solidarity. It seemed possible that a new, more just society could be created; that through pain, the pandemic would at least lead to a rebalancing of our economies. It is now clear that on the contrary, the pandemic has been fueled by inequality and has in turn increased levels of inequality around the world.

Since the start of the pandemic, a new billionaire has been created every 26 hours. The ten richest men in the world have more than doubled their fortunes, while 99% of humanity is worse off. For decades, movements across the world have pressed the panic button over the dangers of growing and extreme inequality.

Oxfam has done this at every annual meeting of the World Economic Forum in recent years and throughout this pandemic. And it’s not just advocates and campaigners: The IMF, World Bank and Credit Suisse have all projected that the pandemic will trigger a spike in inequality around the world.

How the pandemic fueled inequality

The impact of COVID-19 has been much worse for low-income people. Your income level is a stronger predictor than your age of whether you will die from COVID-19, with the poorest people, women, and racialized and marginalized groups being hardest hit. And that in turn has worsened existing health inequalities: McKinsey data shows that 3.4 million black Americans would be alive today if their life expectancy, aggravated by COVID-19, were the same as of their white peers.

As the Forum showed, gender parity has been set back an entire generation for women and girls – it’s now been 135 years – because in many countries women face an upsurge in violence gender bias and unpaid care work. People who live in developing countries are about twice as likely to die from COVID-19 as someone from a wealthy country.

Meanwhile, the wealth of billionaires has increased more during the pandemic than in the past 14 years combined – the biggest increase since records began. As governments pumped $16 trillion into economies to save our lives and jobs, many wealthy people profited from a stock market boom.

While governments and pharmaceutical companies have pulled off a magnificent feat to fund and secure the development of breakthrough vaccine technology to fight COVID-19, their failure to ensure this is shared equitably around the world is slowing the supply of billion people and prolongs the pandemic for all of us.

Our new analysis shows that income and wealth inequality do far more damage than simply creating unjust societies: inequality kills. Conservative estimates suggest that inequality contributes to the deaths of at least 21,000 people every day. These are the lives lost when access to quality health care is a luxury and not a right; when gender-based violence persists; when people are starving in a world where there is no shortage of food. Reducing inequalities would save lives.

How to reduce inequalities?

Permanent taxes on wealth and capital drive healthy economies. But as a short-term measure, windfall taxes could immediately claw back extreme wealth in the real economy and save lives. For example, a one-time tax of 99% on the COVID-19-related wealth gains of just the world’s ten richest men could not only pay to make enough vaccines for the world, but also close funding gaps in the world’s wealthiest men. climate action, improve universal health and social protection, and scale up efforts to address gender-based violence in more than 80 countries. All of that — and those ten men would still be $8 billion richer than they were before the pandemic.

There are precedents for the idea of ​​an emergency windfall tax. The French government taxed wartime excess wealth 100% after World War II. In the United States, President Franklin D. Roosevelt proposed a 100% tax on high earners during the war, and a 94% tax rate on high earners remained in place for a decade after its end. With adequate taxation, we could invest in reducing inequalities through universal health care and social protection, and in climate adaptation. We could fund efforts to challenge the social and cultural norms that silence women, exploit them and deny them opportunities, and fuel gender-based violence.

The COVID-19 pandemic and recent social and political unrest have created a deep sense of urgency for businesses to actively work to address inequality.

The Forum’s work on diversity, equality, inclusion and social justice is led by the New Economy and Society Platform, which focuses on building prosperous, inclusive and just economies and societies. In addition to its work on economic growth, recovery and transformation, labour, wages and job creation, and education, skills and learning, the Platform takes an integrated and holistic approach to diversity, equity, inclusion and social justice, and aims to combat exclusion, prejudice and discrimination based on race, gender, ability, sexual orientation and all other forms of human diversity.

The platform produces data, standards and information, such as the Global Gender Gap Report and the Diversity, Equity and Inclusion 4.0 Toolkit, and pilots or supports action initiatives, such as Partnering for Racial Justice in Business, The Valuable 500 – Closing the Disability Inclusion Gap, Hardwiring Gender Parity in the Future of Work, Closing the Gender Gap Country Accelerators, the Partnership for Global LGBTI Equality, the Community of Chief Diversity and Inclusion Officers and the Global Future Council on Equity and Social Justice.

Above all, we need to change the rules that make our economies so unequal in the first place. This is an ideal historical moment to establish a model of stakeholder capitalism that can respond to the societal divisions created by income inequality. It will take more than money. We need smart public institutions to work with smart businesses to deliver really important solutions to public problems like this.

We must reform sexist laws and repeal laws that undermine the rights of workers to unionize and strike. We must address barriers to political representation for women, racialized groups and workers.

Wealthy country governments should work to ensure that we can supply and distribute vaccines to everyone, everywhere. This means immediately waiving intellectual property rules on COVID-19 vaccine technologies to allow more countries to produce safe and effective vaccines and usher in the end of the pandemic. The most universal crisis of our time deserves this simple and universal answer. Ending this pandemic will take imagination and courage to make our economies work better for everyone.

Payday loan victims only have days to get the last payment