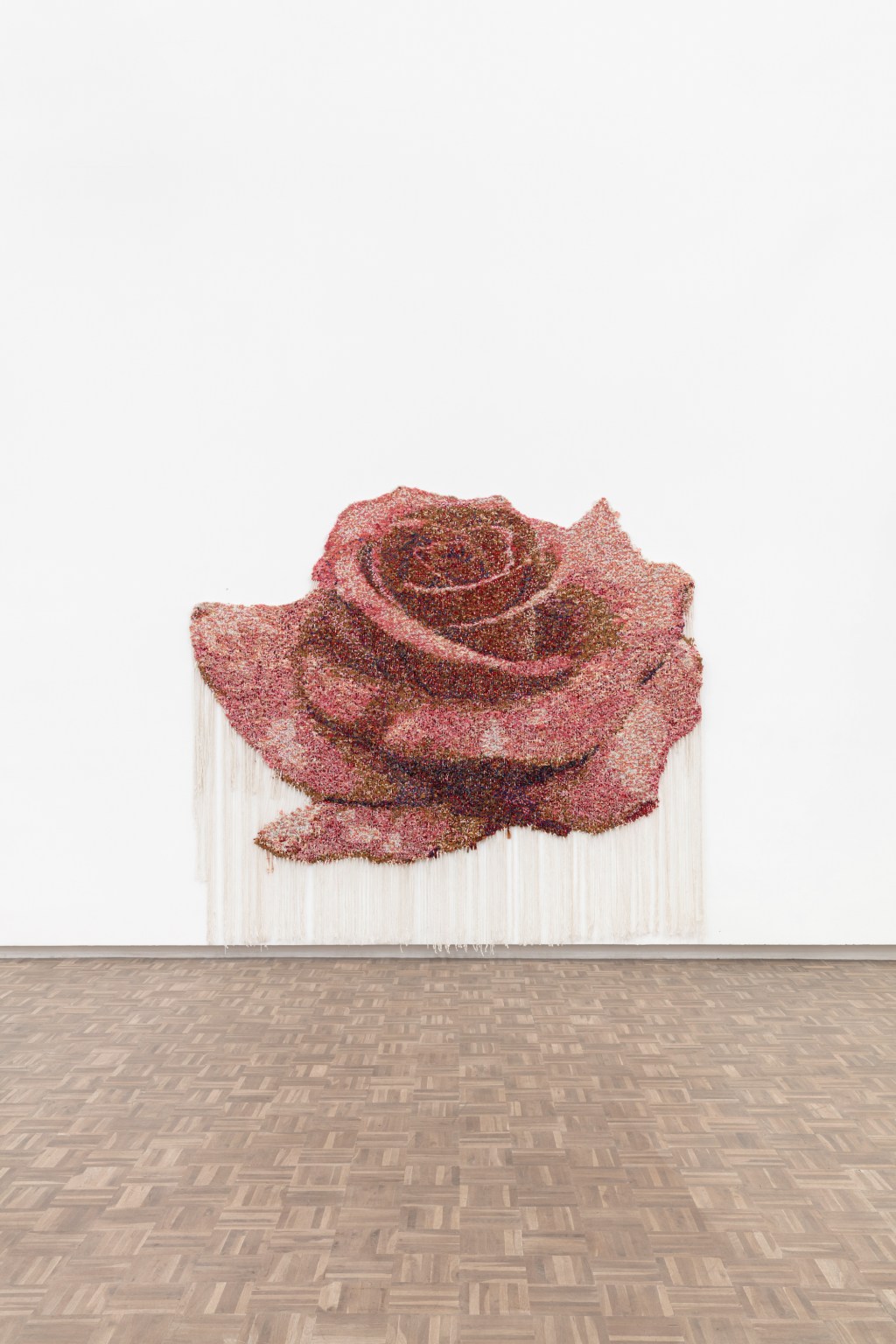 Imagine that you are descending from a paved road onto a strip of greenery, looking for a shortcut. Over many years, many others do the same. By trampling the undergrowth, a new path is created – together, unconsciously, you have drawn what is called a “line of desire”.

This phenomenon lends its name to the title of a new exhibition by Cape Town-based artist Igshaan Adams at the Art Institute of Chicago. His largest exhibition to date, “Desire Lines”, is also Adams’ first major exhibition in the United States and features more than 20 stately and intricate tapestries and textile installations, dating from 2014 to those fresh from the studio. To each he added found objects from his native South Africa – seashells, rope, wire, glass and beads – and sculpted them with the help of his friends and family.

In his art, the literal act of weaving represents how the history of Adams’ hometown of Bonteheuwel, a segregated working-class township in Cape Town, is woven into his spirituality, sexuality and family. Al-Muhyee (the giver of life), from 2020, for example, is a rose in bloom, a nod to her Sufi faith. He titled another I was a hidden treasure, then I wanted to be known (2020), and its thick weave of metal, rope and tassel resembles a canopy or camouflage. His name refers to a belief that God created mankind because he needed recognition; we submit to being known too, says Adams, and hope the rewards outweigh the hardship.

In a new monumental commission created for the exhibition, diverging paths of glass, gold and wood offer visitors multiple paths to follow. His art has always postulated that life is the sum of the paths we travel between the individual and the community, between the self and the soul. Now, a decade into his career, he asks viewers, “If your life left an imprint, like the body does along the lines of desire, what shape would you hope to leave?”

For more on the show, which runs until August 1, ART news interviewed Adams by telephone.

ARTnews: “Lust Lines” seems like such a touching metaphor because it’s something immediately familiar. These paths are everywhere, we have all contributed to them, but without realizing it.

Igshaan Adams: You can’t sit there and watch it happen; you only know it happened because of the evidence over time – that imprint left on the earth. I think that’s another point that I’m strongly tied to, proof of everything that’s going on internally.

Absolutely, that has always been a very important aspect of my investigation of myself. To remind me of things I might have forgotten, or things that live inside me, mystical things. This show has a strong spiritual connotation. lines of desire may be the most important work of art in the exhibition, but it is surrounded by many others. What I learned from a Sufi perspective is that we are in a state of forgetfulness, we have been conditioned to forget – that is the human condition, and it takes tremendous effort to activate these qualities buried behind our layers. That’s what I mean when I say you can’t watch the formation of the lanes. And to relate this to weaving, an action by itself will not make a difference or bring anything significant in reality. It is the constant repetition of action that ultimately creates something substantial. It is only after much effort that you see evidence of this process.

It taps into your theme of collectivism and follows the thread of spirituality – many of your works incorporate prayer rugs in which the act of kneeling connects you to something bigger than yourself.

The prayer rugs bear the trace of the imprint of the body, where the feet and the knees meet and especially where [one’s] the head lightly bleaches the top of the fabric. Materiality is so important to me. The bead, the thread itself is so mundane in that it’s something we see and use all the time, but collectively it becomes so much more than its parts.

Can you tell me more about how your community is involved in your practice?

This is one of the most important aspects of my practice, the sense of community. Weaving lends itself to forming a community because it takes a lot of work – you need a lot of hands. My assistants in my studio are all people with whom I have a strong history, my main assistants are women with whom I worked for five years in an NGO, others are my family. My studio manager is someone I’ve known since I was five years old. I was able to use my relationships and my history with everyone to create something special. I often buy beads or jewelry in bulk and we mix them together like spices in a bag and send the bags to six or seven different homes in the community I grew up in. It’s also a way for families, grandparents, children, some people I haven’t met yet, to earn money. I tried to estimate but I guess 60 or 80 people are somehow connected to the studio.

I grew up in it. For many years there were only two assistants, but I deliberately moved to be community-centric. It’s like asking others to write your biography. And if I send the same batch of pearls to different houses, nothing comes back the same. If there’s a boldness I’m trying to achieve, people with bolder personalities help me out. In art school, we draw the same person and each image is different. There is a variant. There are different hands that trigger something unexpected, make daily material more than its beginning.

Part of the AIC exhibition is to rematerialize the linoleum floors common in Cape Town, so who is better suited for this than the people who walk on them every day.

Who better understands what they represent? One of the show’s security women immediately connected to the ground and said the same thing I hear in South Africa: “Oh, this reminds me so much of my grandmother’s house.” There is a certain feeling that my life is represented in the series. I find that very beautiful.

And it’s your most comprehensive show to date, with works spanning your entire career. How does it feel to take all that?

Oh my god, sometimes I have to stay calm. You have this moment where it is here in front of you, the evolution is clear. Weaving, for example, there is a marked increase in the complexity of mixing materials, which makes me so happy. It’s amazing to see a thread running around, the only self-inquiry, reflected in the outside world. It has always been an obsession. One of the first questions that came to me and stayed with me was about what happened at the beginning of my life, the domestic space, the political environment, my grandfather being a policeman for the apartheid government – how it all created a certain structure internally. What parts of the structure should I keep and what should I discard? It’s not the easiest thing to question. But I realized that I didn’t mind going where there was pain and darkness and not pushing it away, confronting it with curiosity. I asked: Why is this pain not unknown?

And what answers have you found, looking within?

These questions came from real conflicts. Growing up in South Africa being cape colored, I have already had feedback that I was not as good as others. There was something inherently wrong with me. Being queer and being Muslim, for example, I couldn’t reconcile that. I stayed single for two years thinking I wanted to change myself to fit into what was acceptable, but that obviously led to a lonely existence. And thankfully, I’ve freed myself from that, even though the feelings – that I’m queer, and that I want to be loved, and love, and have the full experience of being alive – never go away. I was an atheist before, and I kind of had to come out as a believer.

These first conflicts were settled and the only wish to stay was to have peace. I was so determined to know that, to feel like I could walk in my shoes and stand in my own body without fear or shame. That’s what I won: the settlement of something.

A question you ask in the exposition material is “How would you treat someone differently if you knew all, or nothing, about them?” Can you expand?

Growing up in South Africa has so much to do with what you look like, although I have to admit things have changed. There is tension between Creoles and blacks because the apartheid government classified us differently and managed to create this divide. The Black Lives Matter movement, there has been a change. But before when I met my partner, who is a white British male, there was always such a contrast in the way he was treated in this world, even though he is not of this world. There was always this feeling that if you knew me, wouldn’t you treat me differently? In Cape Town, there was always this suspicion that I am here for bad intentions. This is the universal situation of being Black in the world.

Sensex, Nifty slip into the red