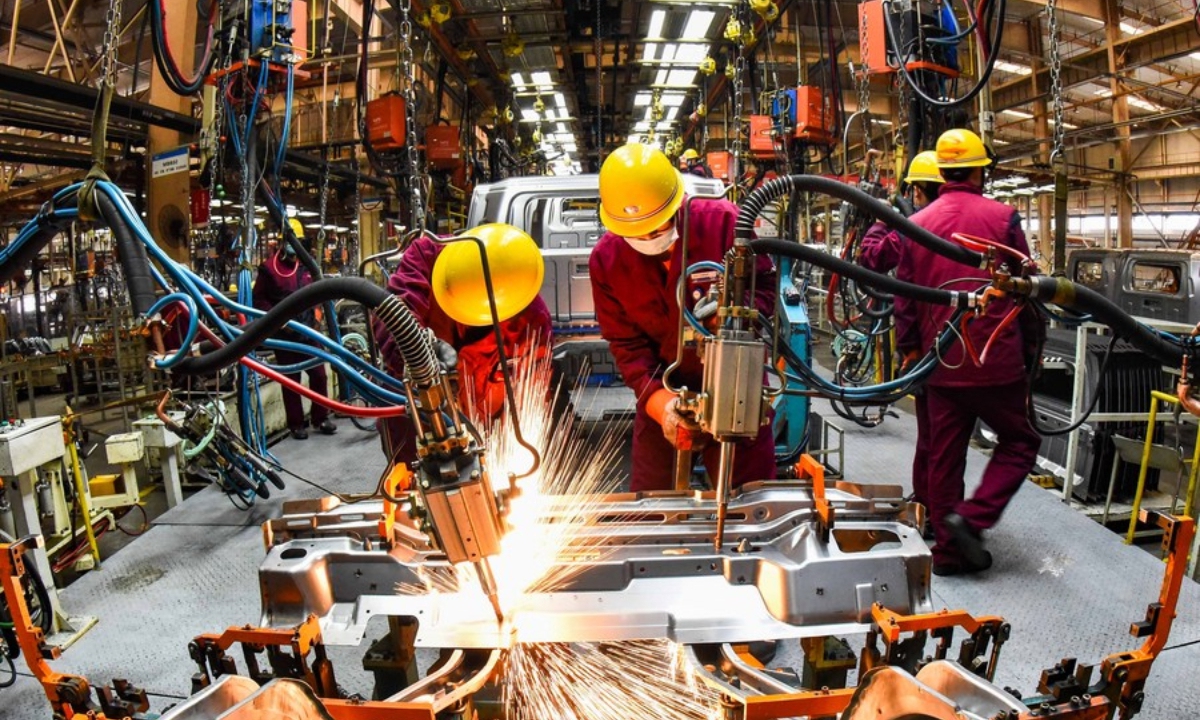 GT Voice: China’s manufacturing modernization will not be contained by US restrictions

Chinese electric vehicle (EV) companies listed in the United States have recently recorded relatively robust market performance thanks to favorable policies and trade performance of the Chinese manufacturing sector. Shares of Chinese electric vehicle brand XPeng jumped 25.28% over the past week, gaining more than 50% in June, while shares of Li Auto saw a weekly gain of 23.05% at Friday’s close, up 62.7% so far this month.

The outstanding performance of these enterprises in domestic and overseas capital markets, whether in terms of share price or financing, underscores the rise of China’s electric vehicle industry and related industrial chains, at a time when the impending energy crisis has made the world aware of the urgency of developing clean energy and European countries are striving to reduce their dependence on non-renewable energy sources. To some extent, China’s gradual emergence as a major player in the electric vehicle industry is a microcosm of the transformation and upgrading of the country’s manufacturing sector.

Currently, factories in China account for nearly three-quarters of global electric vehicle battery production, according to the Financial Times report. And due to the large production size, the cost advantage in China’s key industrial sectors is also significant.

Last month, Tesla CEO Elon Musk said on his Twitter account that “few people seem to realize that China is the world leader in renewable energy production and electric vehicles. Whatever you think of China, it is simply a fact”.

Behind China’s technological lead in both areas actually lies the country’s massive and multi-level manufacturing base, which has enabled Chinese companies to dominate the world in several high-end manufacturing sectors and grow. fully integrate into global supply chains.

Of course, in addition to these favorable conditions, the ongoing industrial transformation and upgrading is not without challenges and difficulties. Currently, the United States and its allies are trying to squeeze China out of global supply chains in a new round of industrial chain restructuring efforts, fearing that Chinese companies could end up by becoming powerful competitors of Western companies.

More than 100 CEOs of major U.S. companies in mid-June called on Congress to pass legislation aimed at bolstering U.S. economic competitiveness against China, according to media reports. Although it may seem understandable that the United States intends to improve its competitiveness, it is wrong to think that such a bill can contain the upgrading of Chinese manufacturing in terms of global industrial chain. .

Since the US-China trade war, the US lockdown on Chinese manufacturing has steadily intensified. The latest is the US ban on imports of products made in China’s northwest Xinjiang Uyghur Autonomous Region, which just went into effect last week.

But even in the face of all-out US repression, the fundamentals of Chinese industry have not changed much. Indeed, the United States, extremely worried about the decline of its relative advantage in high-tech sectors, is increasingly addicted to “crush China” as if it could remedy its own economic problems, but this does not can only strengthen China’s determination to continuously improve its manufacturing. international level and strengthen international competitiveness.

After the United States cut off chip supplies to Chinese tech companies, China’s chip industry is growing faster than anywhere else in the world, according to Bloomberg. This is nothing but proof that there is no way for the United States to contain the expansion and transformation of Chinese manufacturing sectors. China’s high-tech manufacturing sector will make continuous inroads due to pressure from Washington.