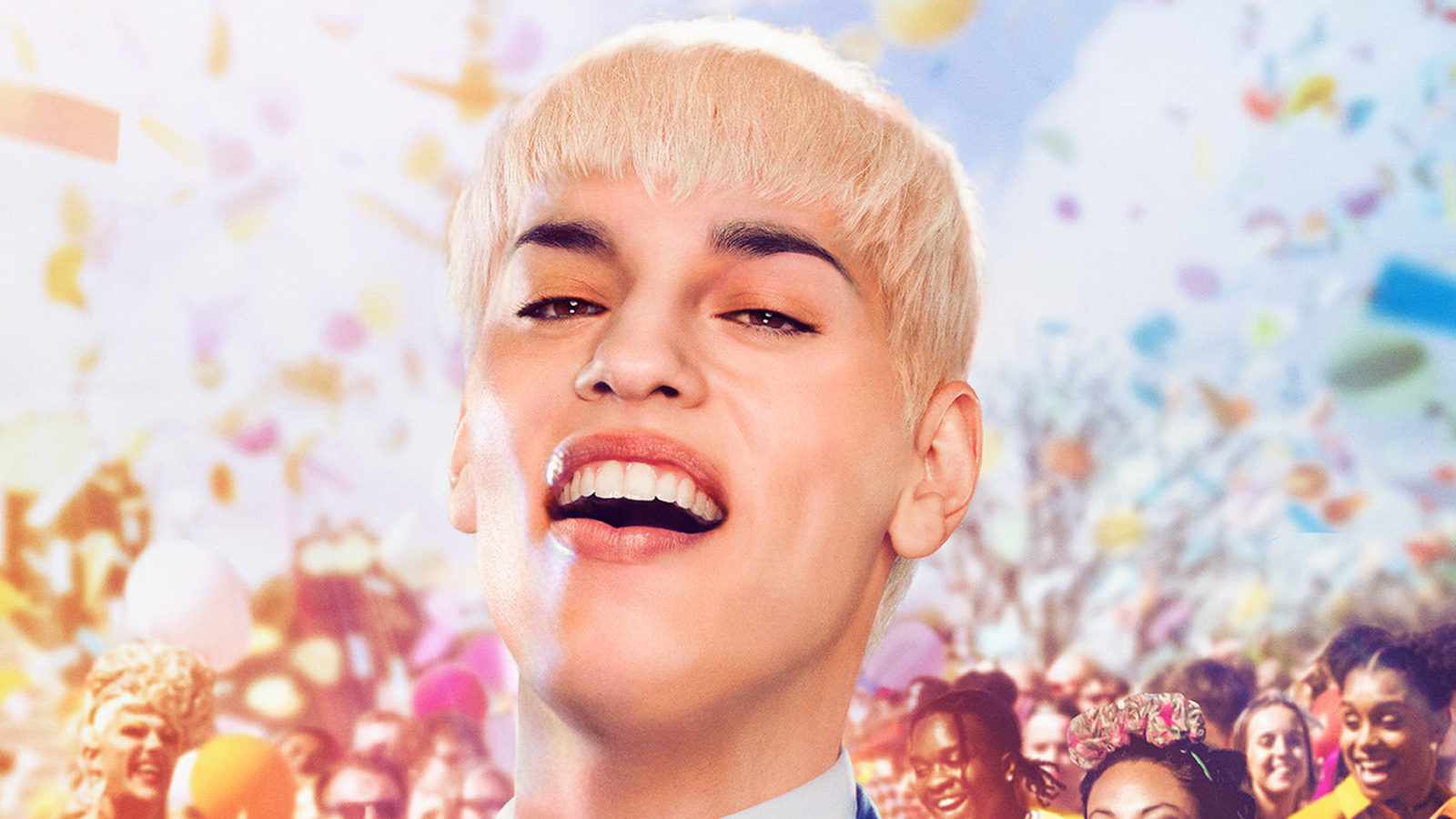 Newcomer Max Harwood plays Jamie New, a 16-year-old with no direction in life, nearing the end of his school years with no idea what he wants to do next. One day he has a light bulb moment and realizes that his vocation is becoming a drag queen – his mother (Sarah Lancashire) and best friend (Lauren Patel) are both supportive, and he’s upfront to the point that he doesn’t care what the homophobic bullies at his school have to say about it. After meeting drag queen Loco Chanelle (an ugly Richard E. Grant), he becomes convinced that he has what it takes to follow in his footsteps, and has an even bigger plan to debut his new look: he’s going to wear a dress to her school prom, something that angered her quietly bigoted teacher Miss Hedge (Sharon Horgan). At home, things are far from rosy, with Jamie long estranged from his father (Ralph Ineson), a simple homophobe who wants nothing to do with him. But none of that matters, because Jamie knows he’s going to make a splash.

The film was adapted from the direction of Jonathan Butterell, who directed the show when it premiered in 2017 in Sheffield, the city where the musical is set. This is Butterell’s directorial debut, and it shows very well, with poor staging decisions for nearly every number in an alleged attempt to make it more cinematic, which only makes the make it look more like an awkward video clip. The criticism directed at “In the Heights” earlier this year that the amount of quick cuts during performances did the choreography a disservice is only amplified here, with Butterell ignoring the original stage instructions for cutting. repeatedly in different places in the middle of the song. The trick to a good musical adaptation is to remember what made it work on stage and convince movie audiences that they too are seeing a fantastic performance that naturally unfolds before their eyes. Only the making of the contagious title song comes close to achieving this goal, with the other numbers played via dream sequences or flashbacks frustratingly cutting between multiple locations, no attempt is made to keep the simplicity that keeps them. made them powerful on stage.

A new song written for the film by Frankie Goes to Hollywood’s Holly Johnson, “This Was Me,” the soundtrack to what other critics have described as the most powerful moment, a flashback to Loco Chanelle in the 1980s and loved ones affected by the AIDS crisis. And it’s undeniably the only moment in the film that feels meaningful, tying what appears to be a low-stakes story in a city into a larger historical context of gay liberation, remaining proudly proud even in the face of tragedy. But just like the other songs on the soundtrack, its staging feels jarring and out of place, another musical number with no performance element, the song playing over grainy VHS footage at the center of the film. This only reinforces the assumption that the director was going against his best instincts, choosing to make these sequences cinematic, instead of filming them in a way that would be analogous to how they would appear on stage. When you don’t feel like the performers are actually singing their songs, you are left with a series of semi-linked video clips separated by dialogue.