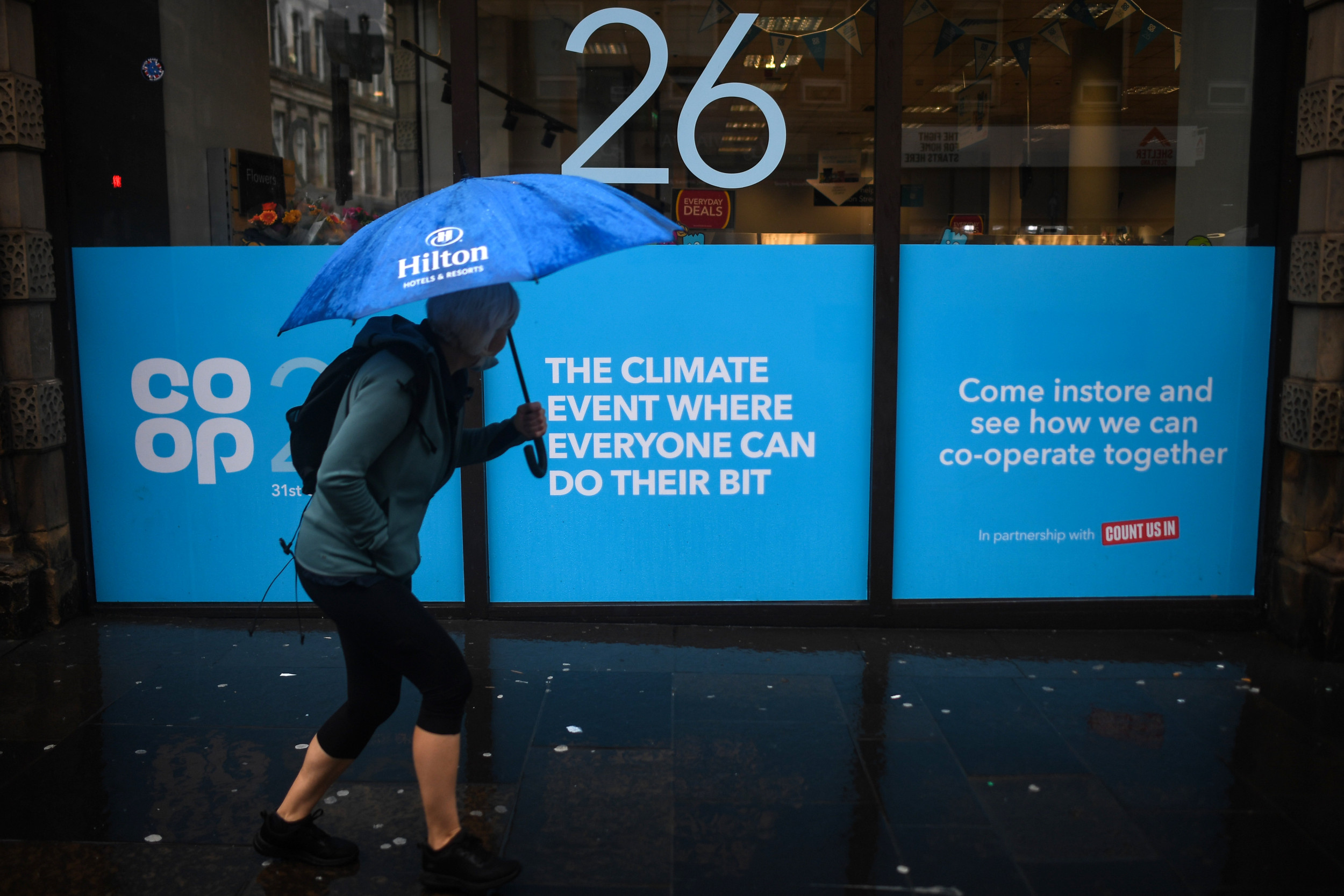 Elites use climate hysteria to immigrate the working class

Few things in life are as predictable as the rhetoric of climate change summits like next week’s in Glasgow. Over the next week or so, you will hear again and again that the planet is dying and that climate change will cause massive dislocations and famine. The end is near, the UN told us, and only penance reducing greenhouse gases can save us.

We’ve been hearing this for decades, with each global confab upping the stakes, insisting that with the inevitable outcome â€œnot enoughâ€ is being done and what we need is to become more militant. And this despite the progress made.

The climate industrial complex, as economist Bjorn Lonborg rightly called the end of the climate world crowd, has persuaded the media to indulge in exaggeration and consistent predictions that connect virtually every weather event – droughts, floods, hurricanes or heavy rains – directly to man-made climate change. As President Obama’s Under Secretary of Energy for Science, physicist Steve Koonin, pointed out that the most widely reported projections only reflect very unlikely worst-case scenarios, based on things such as the ever-increasing use of coal and the lack of significant technological improvement.

Increasingly, even climate scientists are finding that constant and often poorly supported catastrophic talk threatens the credibility of the movement itself. And there have been quiet reversals; the most extreme predictions have been abandoned or backed down, even by the UN itself. And yet, in the United States, the vast majority of young Americans continue to believe that we are facing an impending environmental disaster. And Canadian psychologists have found high levels of anxiety among young people, some of whom believe the climate justifies the decision not to have offspring, which is not surprising given that they are constantly told that their world will end catastrophically.

Of course, some climate changes are real and deserve our attention; it must be remedied. But what we need to combat it is not desperation, but rather a willingness to face future climate changes of all kinds, including those that may be induced by human activities, with a positive effort. The environmental movement must give up “utopian fantasies”, writes Ted Nordhaus, a longtime California environmentalist, and “make peace with modernity and technology”.

A mix of diverse options ranging from nuclear and hydroelectric power generation to replacing coal with abundant and cleaner natural gas and geothermal energy, as well as entirely new innovations could reduce emissions over time without economic consequences and catastrophic social issues. This is especially true in the developing world, which is sorely lacking in reliable and affordable energy.

After all, this is not the first time that humanity has faced ecological problems. Rome, as Kyle Harper writes in his brilliant book, The fate of Rome, has experienced large-scale climate change and water scarcity, but has been kept alive longer through inspired engineering efforts to bring water to large cities and build roads that allow circulation. food to the imperial center. California, my adopted country, faced its historic aridity by carrying out enormous hydraulic works which led to the creation of the American technological and cultural center, as well as the main agricultural producers of the country.

Perhaps the best model is found in the example of the Netherlands, where catastrophic flooding in the 16th century resulted in a large and successful expansion of coastal berms to prevent future flooding. Meanwhile, the inability to anticipate climate change has doomed the civilizations of Mesoamerica, the Indus Valley and Cambodia. More recently, New Orleans has suffered greatly from hurricanes due to the lack of adequate preparations, and today California, in the wake of the Green Left, most often suffers from severe droughts not only due to climate change, but also a persistent reluctance to expand a system designed for half its current population.

Moreover, the West’s attempts to cut emissions quickly will make little sense if developing countries, especially China, continue to spew more greenhouse gases. Since 2010, China has increased its emissions by 25% while the United States has reduced its GHG emissions more than any other larger country. China now emits more than the whole developed world combined. Yet as China builds new coal-fired power plants to run its factories, regulations in Europe and America serve to boost production in China, with its notoriously carbon-rich supply chains and polluted cities; China is home to 23 of the 25 largest cities in terms of GHG emissions, according to study

By accelerating Western deindustrialization, the climate movement has made matters worse. China’s dominance in the production of solar panels and the essential metals needed to produce “clean” electricity and electric cars are, ironically, produced under far less environmental conditions than they would have been here in the United States. United States.

Unlike Western elites, China’s strategy is shaped by self-interest, not guilt. As energy supplies have recently tightened, threatening China’s industrial ascendancy, China has relaxed its climate policy and started to “build back better” by adding more than 1,000 coal-fired power plants that will produce even more. of coal. Xi Xinping and his winger, Vladimir Putin, pretend to be concerned about the climate, but clearly prioritize improving the overall economy rather than winning applause from academia and media clergy. Control of climate communications is not quite complete here yet, but rest assured: Google and the other oligarchs, encouraged by progressives, are working to control the debate much like the state does in China.

Unlike China or Russia, another beneficiary of the Western shift from fossil fuels, people in democracies and â€œopen societiesâ€ still read contrarian narratives and sometimes fight their governments. Rising energy prices sparked rebellions in France, Alberta and Ontario, as well as many states, including Washington and Colorado, where voters rejected things like carbon taxes and bans on oil drilling. Overall, most Americans are indifferent or hostile to many fundamental aspects of the Green New Deal, and would be reluctant to spend much more than a pittance to support its proposals.

For some greens, the current energy shortages plaguing the United States, China and Europe reflect progress towards a glorious era of net zero emissions. Climate activists see the draconian lockdowns of the pandemic as a “test” for future social control, and the middle and working class have reason to fear the policies adopted by this elite. The “big reset” adopted by the Davos crowd identified crushing social mobility and limiting prosperity as preconditions for environmental salvation. We saw the first outbreaks of climate-related poverty – what one socialist carefully termed “eco-Thatcherism” – with clear evidence in California, the UK and Germany. In large part because of climate policies, many middle-class and working-class families will face fuel bills that could rise by 50% this winter.

Such policies barely have an impact on the upper classes who proudly attend events like Glasgow. After all, the very wealthy – British royals, Hollywood celebrities, supermodels, Michael Bloomberg, Bill Gates and Jeff Bezos – have learned to accept the climate ’emergency’ while continuing to build new areas, to organize $ 2 million weddings, fly their private jets and even take a ride in space. All this while asking hoi polloi, and impoverished developing countries, to live ever smaller.

The lure of the potential benefits of green policies also makes them a good business prospect for venture capitalists, tech companies, and Wall Street interests looking to capitalize on the disruption of what used to be a generally reliable energy sector.

But at some point people will start to oppose this blatant science misuse and fear campaign. Medieval pauperization justified by apocalyptic theology should not define the inevitable trajectory of humanity.

Joel Kotkin is Presidential Fellow in Urban Futures at Chapman University and Executive Director of the Urban Reform Institute. His new book, The advent of neo-feudalism, is now out of Encounter. You can follow him on Twitter: @joelkotkin.

The opinions expressed in this article are those of the author.