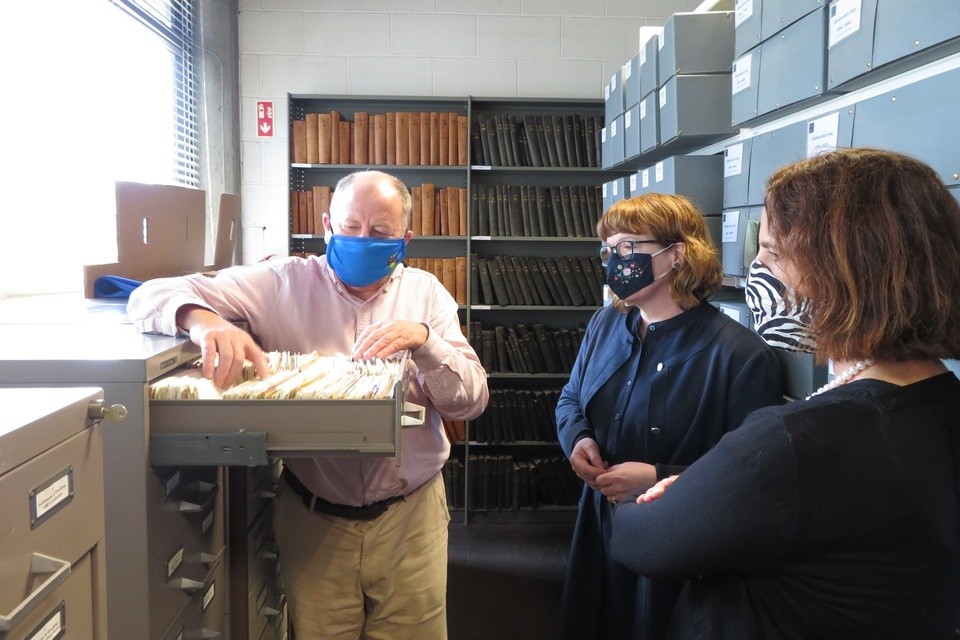 CrÃ­ostÃ³ir Mac CÃ¡rthaigh, director of the National Folklore Collection at University College Dublin (UCD) flips through the pages of a book, handwritten in Irish in 1933.

It opens with the details of a person – their age, gender, profession, etc. – then simply tell her story as she told it.

“That would be typical of the work of the Folklore Commission,” he said, which was interested in rural affairs and the Irish language.

He takes another book. â€œIt’s a little more painful, but we made a series of survivor stories,â€ he says.

So far, those in the National Folklore Collection have interviewed 16 survivors of the institutions and there are more people lined up to talk to this summer.

When folk archives do an interview, they transcribe it verbatim, so that the person can tell their story in their own voice, explains Mac CÃ¡rthaigh.

â€œThe UCD Folk Archives are the memory of Ireland,â€ says Deirdre Nuttall, a folklorist who is leading a new project for DÃºn Laoghaire-Rathdown County Council.

The council calls on people to tell their stories – or the stories of their family members – especially those from the working class of DÃºn Laoghaire-Rathdown, or those who have worked in “ordinary” jobs.

They will store these stories in the UCD Folklore Archives so that they are available to researchers and students around the world for generations to come. It’s part of an oral history project they call A popular story by DÃºn Laoghaire-Rathdown.

The idea to do a â€œpeople storyâ€ of the region came from this public consultation, she said.

â€œOne of the ideas that came up was the need for an oral history program,â€ says Black, seated at a large wooden table, surrounded by collections of books from the National Folklore Collection.

The idea sounded exciting, she said. â€œTo stage the untold stories. What are the books missing?

DÃºn Laoghaire-Rathdown County Council is one of the wealthiest areas in Ireland, says Mac CÃ¡rthaigh, but understandably there were a lot of working class people working there, in a wide variety of jobs. .

These are the county’s â€œundocumented storiesâ€, he says.

Nuttall, a freelance ethnologist and folklorist, says it’s about correcting the balance. â€œThe nature of the story is that rich people tend to be better documented than regular people,â€ she says.

She wants to know the life of shopkeepers, artisans, traders, people working on ships, or in service in large houses.

It was common for trades like stonecutting to be passed down as well, Black says. â€œBecause there was continuous employment compared to other regions of the country, there is often a multigenerational continuity of trades. “

People traveled from all over Ireland to do in-store apprenticeships in DÃºn Laoghaire, says Black. How was life for them, far from home at 14 or 15 years old? She wonders.

Statistics can show how many people have worked in a particular trade or industry, but the idea of â€‹â€‹this project is to color those facts black and white, to reveal “what the story looks like,” says Nuttall.

The council appeals to people, especially the elderly, who may have stories from their youth, or stories passed down from their parents or grandparents, about life in DÃºn Laoghaire-Rathdown.

Second-hand accounts can help paint a picture of what life was like from the Revolutionary War, and even into the late 1800s, Nuttall says.

They can be subjective, but they can “add to the documented history,” she says.

Nuttall will do most of the interviews, she says. Mac CÃ¡rthaigh is interested in maritime history, so he can sit on some that are related to ships.

Participants can choose whether they want to do the interviews with friends or relatives, or alone, says Nuttall.

She is very keen to talk to living relatives of people who have worked in large houses in particular, she says.

â€œGardeners, cooks and housekeepers, housekeepers,â€ she says. “For every big house, there is an army of people keeping the show on the road.”

Nuttall and Mac CÃ¡rthaigh recently collaborated on a project, Protestant Folk, to incorporate the stories of the Protestant peoples of southern Ireland into the National Folklore Collection. Nuttall recently published a book on the subject.

She wonders if some people felt a shared loyalty during the War of Independence – torn between loyalty to a decent boss, perhaps, and their own penchant for independence, perhaps.

â€œThese places were big employers and they weren’t all bad owners, some were seen as good employers,â€ she says.

Whatever story people have to tell, if it relates to the lives of DÃºn Laoghaire-Rathdown workers, Nuttall, Mac CÃ¡rthaigh and Black want to hear it.

They are currently creating a database of interviewees, with a view to starting interviews soon, and asking people to email them at [emailÂ protected].

Industries that will be helped – and hurt – by inflation