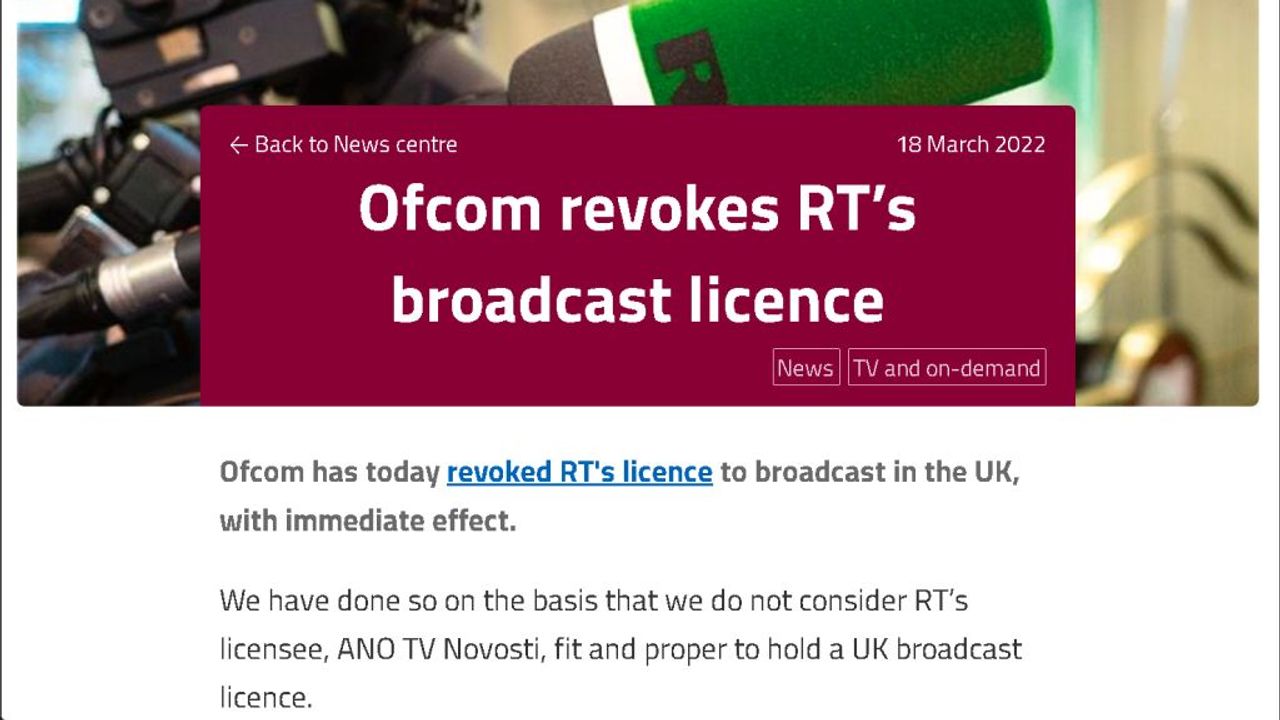 Last Friday, the British Office of Communications (Ofcom) stripped Russian state news channel RT of its broadcasting license. Ofcom ruled that RT was not “fit and proper” to broadcast in the UK and that failure to revoke its license risked “undermining public confidence in regulated broadcast information”.

RT has not been broadcast in the UK since March 2, after European Union (EU) sanctions on RT and Sputnik cut its feed from satellite companies in France and Luxembourg to Sky, Freesat and British Freeviews. EU sanctions also canceled RT from social media platforms Twitter, Facebook, Tik Tok and Google’s YouTube and Google News search.

The British government has seized on Russia’s invasion of Ukraine, prompted by NATO’s expansion on the Russian border, to intensify state censorship and anti-Russian hysteria. The Ofcom ban is the culmination of efforts to strip RT of its license since the channel first aired in 2010 (its first breach, while licensed to Information TV, was in 2011).

RT is a state-funded media outlet that promotes the views and goals of Russia’s capitalist oligarchic government. The WSWS has no mandate for Putin’s regime and opposes his invasion of Ukraine which divides the Russian and Ukrainian working class and plays into NATO’s hands. But the shutdown of RT by Britain, the US and the EU is a reactionary move that stokes anti-Russian sentiment, demonizes the Russian people and sets the stage for war.

On February 23, a day before Russia invaded Ukraine, Prime Minister Boris Johnson asked Ofcom to investigate RT. He did so at the request of Labor leader Sir Keir Starmer who denounced RT in parliament, demanding “will the Prime Minister now ask Ofcom to review his licence?”

Johnson replied that Culture Secretary Nadine Dorries had written to Ofcom to look into the matter, “but we live in a democracy and a country that believes in freedom of expression. I think it’s important that we leave it up to Ofcom to decide which media to ban, rather than politicians – that’s what Russia is doing.

Ofcom’s March 18 notice canceling the three broadcast licenses held by RT owner ANO TV Novosti was worded in terms of “fairness” and “freedom”. The 12-page opinion cites “required impartiality” 29 times and “freedom of expression” or “freedom of opinion” 12 times. It is a document that reeks of hypocrisy and is a new step in wartime censorship, setting a precedent for instantly shutting down media that challenge British foreign policy.

Needless to say, Ofcom did not strip the BBC, CNN or hundreds of other outlets of their broadcast license for promoting state propaganda for invasion and occupation. military force in Afghanistan and Iraq by the United States. These war crimes under international law claimed one million lives but did not trigger sanctions or a UN resolution condemning US-British military aggression.

To further justify its accelerated ban, Ofcom cited repressive new laws introduced by the Russian government making the “public dissemination of deliberately false information about the use of the armed forces of the Russian Federation” punishable by death. imprisonment of up to three years or a fine of up to 1.5 million rubles; or up to 15 years if this false information leads to “serious consequences”.

So what about Julian Assange, who has already spent 10 years in arbitrary detention in the UK and faces 175 years in a US federal prison under the Espionage Act (1917) for publishing information truths revealing war crimes, secret renditions, torture and unlawful mass surveillance by the US, UK and allied governments? Home Secretary Priti Patel is currently preparing to sign her US extradition warrant.

ANO TV Novosti was denied even the semblance of due process. His ban was announced despite Ofcom admitting it had not concluded any of its investigations into complaints about RT’s war coverage. Novosti was initially given just two days to respond to Ofcom’s claims that it was not ‘suitable’ to hold a license, and the regulator refused to grant RT the requested time to access a performance legal in the UK.

The British anti-Russia juggernaut was advancing at full speed. On March 15, Margarita Simonyan, editor-in-chief of RT, was subject to British sanctions banning her from travel and freezing her personal assets.

The Ofcom ban shut down a news channel with a quarterly audience of 2.5million, a move taken “to protect the public from harm”. John Pilger, George Galloway and Ken Livingstone are among those who have made regular appearances on RT, their critiques of Britain’s neo-colonial wars long since removed from the BBC and other major networks.

Ofcom’s March 18 notice reviewed ANO TV Novosti’s “compliance history” in Britain, including 15 breaches of its Broadcasting Code between 2012 and 2017. Seven of these concerned alleged breaches of required impartiality and/or accuracy. RT was in fact sanctioned for broadcasting material that contradicted British/NATO war propaganda, including:

RTThe Truth Seeker: Genocide in Eastern UkraineJuly 2014, depicts the massive repression and displacement of civilians in eastern Ukraine by the Ukrainian military and far-right militias. The RT program cited UN sources on the scale of the refugee crisis.

In 2018, RT was hit with new sanctions after it ridiculed lurid allegations that Russia ordered the ‘novichok’ poisoning of former Russian spy Sergei Skripal and his daughter in Canterbury, England. The unsubstantiated claims were repeated by the entire British press, setting off a tidal wave of anti-Russian jingoism and providing support for NATO’s military buildup in the East.

Ofcom says it had “extensive engagement” with RT over its “Section 5” breaches between 2012 and 2017, including “several meetings” with Ofcom’s Orwellian Standards and Public Protection team. Novosti argued that Ofcom should take into account RT’s publicly stated aim of “providing an alternative perspective on major world events”. His calls were ignored.

Of course, RT’s coverage of world events usually bears the clumsy brand of the Russian government. The channel promotes all sorts of far-right movements, including the UK Independence Party (UKIP) and Nigel Farage in Britain, reflecting the nationalist view of the Russian state. But GB News and Fox promote similar views and neither channel is under any threat from Ofcom.

It is symptomatic of the war fever gripping the upper middle class that not a word of protest has been heard from a single prominent intellectual or journalist condemning the state ban on RT. The drafting of Guardian are the surest reflection of this social stratum, lacking even a flicker of democratic instinct and eager to ingratiate themselves with British military and intelligence agencies whenever possible.

The RT ban is a serious warning of things to come. It must be fought by a genuine anti-war movement of the international working class.

After three decades of wars led by the United States, the outbreak of a third world war, which would be fought with nuclear weapons, is an imminent and concrete danger.

Advocating for a Consolidated Equity Band: Myths and Reality