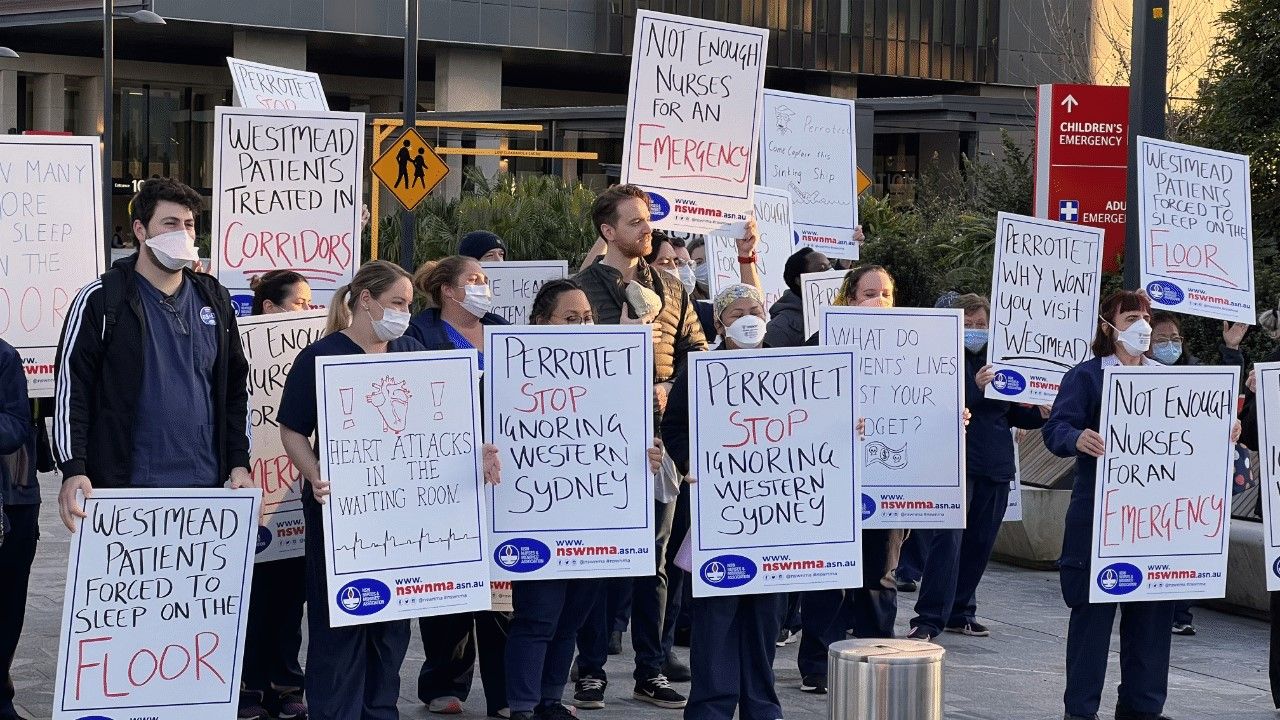 Nurses at two hospitals in western Sydney staged protests at the end of their shifts on Monday morning, protesting chronic understaffing and overcrowding amid a growing rise in COVID-19 infections.

Health workers at Blacktown and Westmead hospitals were calling for mandatory nurse-to-patient ratios of 1:3 in emergency departments and 1:4 in general wards, as well as an overall staff increase.

Due to understaffing, nurses said, patients wait hours for emergency care, some suffer heart attacks or strokes in waiting rooms, and are often forced to sleep in the corridors because there are no beds available in emergency or in the services.

The long-standing healthcare workforce crisis has been significantly worsened by the COVID-19 pandemic. Currently there are more than 2,200 COVID-19 patients in NSW hospitals, a figure that is fast approaching January’s peak of 2,943. More than 2,500 state health workers are unable to work due infection or exposure to COVID-19.

It is the direct result of the abandonment of virtually all public health measures under the ‘let it go’ policies adopted by all Australian governments, Labor and Liberal-National. This deadly strategy has created the conditions for the current wave of infections and disease to be far worse than Omicron’s initial wave.

The workers are also facing real wage cuts because, like all public sector workers in New South Wales (NSW), they are subject to a punitive cap on annual wage increases. Although this rate was recently increased from 2.5% to 3% in response to a wave of industrial action, it remains well below the official inflation figure of 5.1%.

The decision by dozens of nurses from each of the hospitals to demonstrate at their own pace, at the end of a grueling 12-hour night shift, reflects both the scale of the escalating crisis and the determination of the workers. to fight for the interests of their patients and themselves.

But the actual protests, organized by the New South Wales Nurses and Midwives Association (NSWNMA), were little more than public relations stunts, designed to reinforce the union’s isolation of workers and twist their struggle into a campaign Labor election.

Union organizers led the workers through a series of chants, the most telling of which was: “Attention Perrottet, Western Sydney is on its way!

Since the first mass nurses’ strike in February, the NSWNMA has insisted that New South Wales Premier Dominic Perrottet and his Liberal-National state government bear sole responsibility for the crisis in the hospital system, a blatant lie designed to cover up the aggression imposed by the bipartisan union. on public health for decades.

Even as union spokesmen denounced the Perrottet government, they called on the prime minister to visit the emergency department, cynically suggesting to workers that decades of funding and pay cuts would be undone if only the government knew how much. conditions had become bad.

Organizers concluded Monday’s protest by saying there would be another strike at the end of August, stressing that the union will continue to prolong the dispute with sporadic one-off actions ahead of the national elections in March 2023. .

The reality is that electing a Labor government will do nothing to solve the problems facing nurses. In May, NSW’s Labor opposition sided with the Liberal-National government to block a push to legislate ratios in regional and rural hospitals.

NSW Labor leader Chris Minns also made it clear that any pay rises for public sector workers in the state must be based on increased productivity. This is in line with the federal Labor government’s austerity agenda of Anthony Albanese which, ahead of the May 21 election, promised ‘a better future’ but now demands ‘sacrifices’ from working people and warns against the deepening cuts in real wages.

Throughout this year’s dispute, the union has harbored the illusion that conditions for healthcare workers are more favorable in neighboring Labour-ruled states of Queensland and Victoria, due to minimum nurse-patient ratios . During Monday’s protests, the union was trying to push this divisive lie even further, suggesting that the struggle of nurses in western Sydney is somehow separate from that of their colleagues in the rest of the city and across the country. ‘State.

The aim is to pit sections of workers against each other, just as a growing number of nurses are calling for a broader mobilization, not only of all health care workers, but of teachers and other sections of society. working class.

In response to Monday’s protests, one worker wrote on the NSWNMA Facebook page: ‘I’m a bit disappointed we didn’t all stand up to United and come out in unison as many co-workers various emergency services face the same challenges. We are all suffering so we should ALL STAY UNITED in every LHD [Local Health District].”

Another wrote: “All state nurses unions should band together because we all have the same problem. We have heard nothing from the victims’ union ANMF while this is happening in New South Wales.

The union is desperate to prevent such a broadening of the struggle and tries to divert the nurses’ anger and determination into a waning series of increasingly limited and demoralizing actions, until the exhausted workers reluctantly accept the government claims that nothing can be done.

That goal was made clear at a June 28 work stoppage meeting, held after the third vote for a statewide strike in less than six months. Instead of large public protests across the state, the union held a single closed-door meeting in Sydney, with just over 1,000 workers in attendance, mostly via livestream. Only a few hundred workers were present in person.

NSWNMA General Secretary Brett Holmes has opposed a motion by the prosecution seeking a pay rise of 7% per annum. Holmes threatened “three percent is terrible, but zero is worse”, but was unable to prevent the motion from passing. Unable to maintain full control over even this relatively small meeting, the union is now trying to wear down the workers one facility at a time.

On three occasions this year, nurses’ anger and frustration have forced the NSWNMA to call statewide strikes. In February and March, these included mass rallies in Sydney and other cities and towns. Even then, the union sought to limit actions as much as possible, forcing separate votes in each branch, meaning workers struck at different times depending on their location.

Only NSWNMA members working in public hospitals were allowed to participate, excluding older workers as well as nurses and midwives employed in the private sector. The strikers have been completely separated from the thousands of other healthcare workers and paramedics covered by different unions, who have also taken industrial action in recent months against falling real wages and impossible working conditions.

Across Australia and around the world, healthcare workers face the same challenges: low pay amid spiraling inflation, understaffing, overwork and the constant risk of serious illness or death from COVID-19. 19.

To advance their fight for safe staffing levels, better patient outcomes, living wages and the elimination of COVID-19, nurses and midwives must reject the NSWNMA’s isolation campaign . Instead, they must look to the growing numbers of workers in health, education, transport, across the public sector and more broadly, who are reentering the class struggle after decades of union suppression.

This will require the formation of new organizations of struggle, rank-and-file committees, independent of the NSWNMA and all other unions, and a struggle for a socialist perspective and the establishment of workers’ governments to reorganize society to serve the interests of Civil society. need, no private profit.

The working class must have a political voice, which the Australian ruling class seeks to stifle with this legislation.