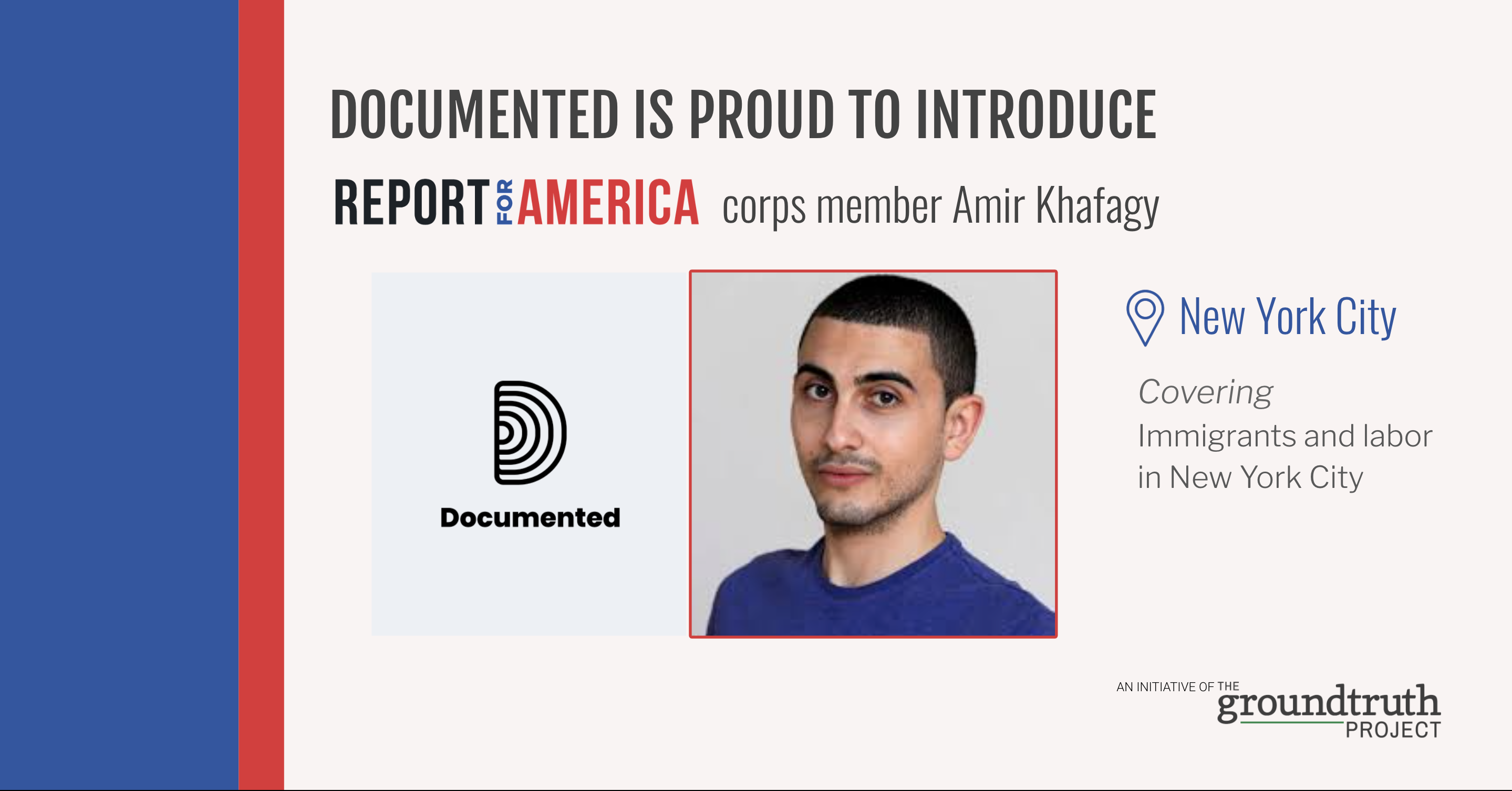 Amir Khafagy joined Documented as a member of the Report For America body. For the next year, it will cover work as it relates to New York’s immigrant communities.

The pandemic has heightened awareness of the many difficult, dangerous and low-paying jobs that exist to keep NYC running. Award-winning journalist Amir Khafagy will cover a range of issues, including restaurants’ reliance on immigrant workers, the connection between the construction industry and state policy, and the role of labor immigrant work in the technology industry. He has been a writer for Documented since 2020 and has covered numerous immigrant worker struggles, including the 2021 taxi strike.

We provide essential news and information for and about New York’s immigrant community. Your support will allow this work to continue.

A lifelong New Yorker, Amir Khafagy was born and raised in Jackson Heights, Queens, to a working-class Muslim family. Her mother is Puerto Rican and her father is an Egyptian immigrant. He is also the author of the upcoming book “Making Good Trouble on Staten Island: Chris Small’s Battle to Unionize Amazon” published by OR Books.

How do you center the experience of local immigrants in your work as a labor journalist?

To fully report on the immigrant experience, you need to report on their work experience, because many immigrants are working class. Language and culture may seem like barriers, but if you meet people where they are and allow them to not only tell their own stories, but to be active voices, not just passive victims, the authenticity of an item will appear on the page.

Of your coverage of recent workers’ struggles, what are you most proud of having written? Has working with these organizers given you new perspectives on the trade of labor journalism?

It’s hard to pick a story I’m most proud of. I have written so many. I guess what I’m really proud of is writing about the resurgence of the labor movement during the pandemic. It is very rare to be on the ground while history is being made. Across the country, workers are standing up to their bosses and refusing to accept abusive working conditions.

The pandemic has really exposed the dark underbelly workers have had to endure for so long. The added hardships of a pandemic were more than enough for them to revolt. Covering this critical and historic moment was such a privilege. Coming from a labor and union background myself, rooting myself in the new wave of unionization has really given me confidence in the future of the labor movement.

What made you interested in journalism and what brought you to Documented?

Ever since I was a child, I wanted to be a journalist. Well, actually, I also wanted to be a director, cartoonist, actor and politician. But believe me, the journalism was there too. The idea of ​​exposing institutional hypocrisy and speaking truth to power really excited me. Not to mention I was a big fan of the old TV show, Kolchak: The Night Stalker and that show really made journalism great.

When I became an organizer and activist, I met many journalists, including Max Siegelbaum, who covered stories around which I organized. Unfortunately, many journalists I met did not look like me or came from the neighborhoods where I came from or in which I was organized. They didn’t share the same experience or have a similar worldview. Long story short, one day I decided to go into journalism myself.

Around 2017, I decided to seriously pursue journalism. I was already in graduate school for urban policy, so a lot of my dissertations felt like news stories anyway. When I met Max and he told me about Documented, I really wanted to get involved. A newsroom dedicated to New York immigrants was a dream come true. It was an opportunity to tell stories from an experience and perspective that I knew intimately.

There were few outlets that allowed me to explore my own backyard to the same extent. Documented also shared the same values ​​as me regarding partnership with the communities we cover. It was also a newsroom that was open to the possibility of betting on relatively young and inexperienced reporters and that allowed me to grow into the reporter that I am now. I cannot express how excited I am to grow even further.

Thanks to your reports, you were able to follow how immigrants organized themselves to improve working conditions, housing and public aid in order to survive the first days of the pandemic. Is this dynamic still strong or is it changing?

I think it’s even stronger now than before. While the mayor frantically attempts to return the city to “normal”, working-class immigrant communities refuse to accept a return to normal due to the invisibility of normal means. If there’s one good thing to be said about the pandemic, it’s that it’s brought to light long-simmering issues in this city that immigrants to this city have been grappling with for so long. Wage theft has long been a pandemic for immigrant workers. The same goes for the taxi medallion crisis, the harassment of street vendors, the criminalization of sex workers and the deaths of construction workers. The pandemic was the catalyst workers needed to fight back. They had just enough. Now that their struggles are visible, the struggle must now remain visible. At Documented, we’ll do our best to keep them visible.

What excites you most about your new role? How can our readers support you as you continue to cover the work in New York?

It’s going to be an exciting year for sure. I have a long list of story ideas that I can’t wait to report on. At the risk of sounding overambitious, I want to help make Document the number one source of information on immigrant workers in the country. For example, exploring the wage theft epidemic in this city is a top priority. I like to see my reporting as a collaboration with affected communities. I want our newsroom to be a space where immigrant communities feel comfortable enough to have a sense of belonging. Far from parachuting into a community to report a story and fly away, my reporting will be rooted in the communities I will be reporting on. Since I live in Jackson Heights, Queens, I am deeply rooted in the immigrant experience. I could easily be found on the busy streets of downtown Flushing or under the roaring 7 train in Jackson Heights. My eyes and ears are always on the lookout for the next story.

People can directly submit Amir Khafagy’s work stories or send tips via Twitter to @AmirKhafagy91 or by email to [email protected] Sign up for the Early Arrival newsletter to follow Amir Khafagy as he covers immigrant labor in New York.