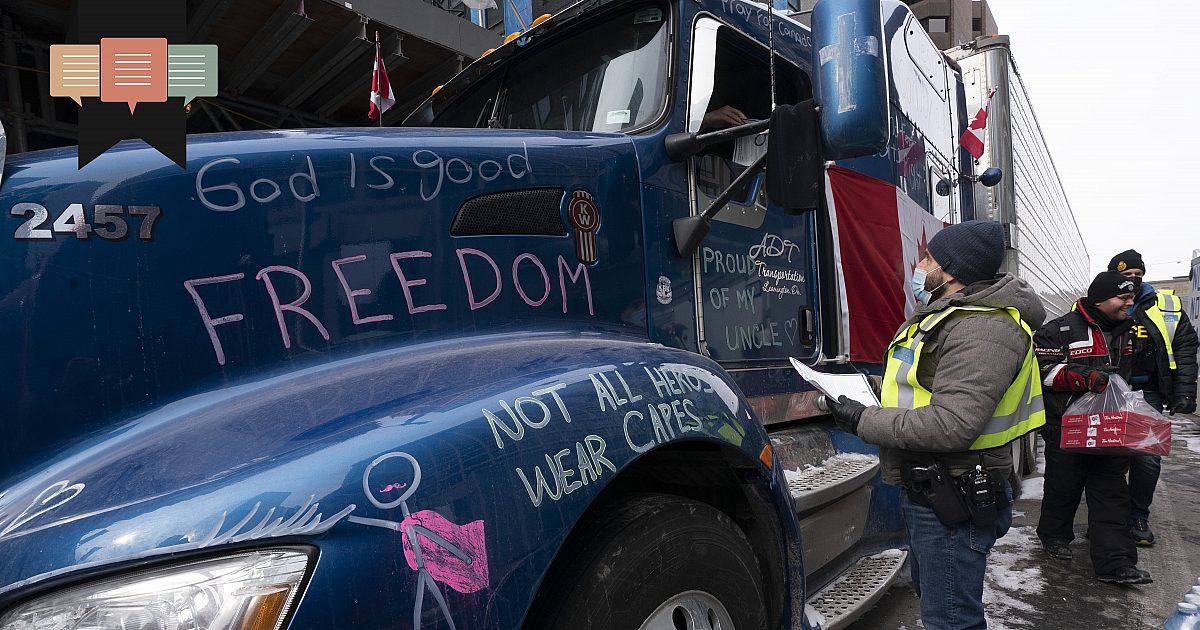 A workers’ cause of freedom

Canadians are like hobbits. We go quietly and kindly about our business. But we can also rise up with surprising courage and determination against our administrative overlords and suddenly throw them off a political cliff when they are pushed too hard and taken too much for granted.

It is with astonishment that the world witnesses as the Freedom Convoy stretches from coast to coast, focused on stopping Canada’s capital, Ottawa. Honking and blocking major thoroughfares, truckers and their pedestrian supporters (families, mothers and children, grandparents) surround Parliament Hill, but with no breach, no violence or destruction, and almost no litter. Since then, friendly fellow citizens in dump trucks, farm equipment, front-end loaders and even a few riders have joined them.

Truckers were first prompted by their own concerns. The Canadian government has required unvaccinated truckers delivering goods to the United States to be quarantined after returning to Canada. If this had been a rare circumstance, it would not have prompted anyone to revolt. But Canada is the main trading partner of the United States. Billions of dollars of goods constantly cross the border by truck. This restriction was extremely burdensome for these people on whom we depend so much.

But their demands quickly widened. Truckers want federal and provincial governments to lift all pandemic-related restrictions: vaccination mandates, border restrictions, quarantine requirements and the use of digital vaccination passports to control who can participate in ordinary activities of daily living. In other words, with a milder COVID variant and 89% of adults fully vaccinated, they want pre-pandemic freedom.

These people are the working class, not an ideological fringe. They are not trained Marxists, or a moral underclass as the Canadian media portrays them. They are not unhinged Antifa criminals or unemployed youths with too much passion and too little to do. They are ordinary people trying to make their government representative. They are blue-collar, ethnically diverse and sick and tired of being beaten like pavement stones by the managerial class. Even the New Democratic Party, the Labor Party of Canada, has abandoned them. Party leader Jagmeet Singh, without any credible evidence, called white supremacist truckers – even if they include Sikhs and other visible minorities.

Five provinces have now lifted COVID restrictions, including Canada’s largest, Ontario, though that may have nothing to do with the protest. It may just follow the end of restrictions in Britain, Denmark, Sweden, Norway and even states south of the border ruled by Democrats like New York, New Jersey and Pennsylvania. It may also be a response to a new poll which reports that 54% of Canadians say “it’s time to remove the restrictions and let Canadians manage their own level of risk.”

But Prime Minister Justin Trudeau refuses to budge on his COVID diet or even talk to the malcontents. Instead, he slandered them by calling them insurgents and racists. Trudeau called this massive nationwide convoy a “small fringe minority of people” who hold “unacceptable views.” Having made his point, he fled the capital with his family ahead of the convoy, claiming asymptomatic COVID infection. His cowardice aside, he is no doubt emboldened by the polls against these grumpy subjects. Fifty-six percent of Canadians have no support for the truckers and 64 percent believe the protest threatens democracy and must be stopped immediately, even by military force.

The working class of Canada is not historically poor. They once had powerful unions and strong political allies. But now the interests of the working class are easily sacrificed for the benefit of the most connected and glamorous.

God has established government to love our neighbor in the way appropriate to government action and policy. This includes defending the vulnerable in their freedom and ability to pursue their rightful divine callings. For these truckers, and the millions of others they defend, that includes lifting outdated pandemic restrictions on people who now suffer more harm than good.

When Canadians stand up and protest, pay attention. Something big is happening.