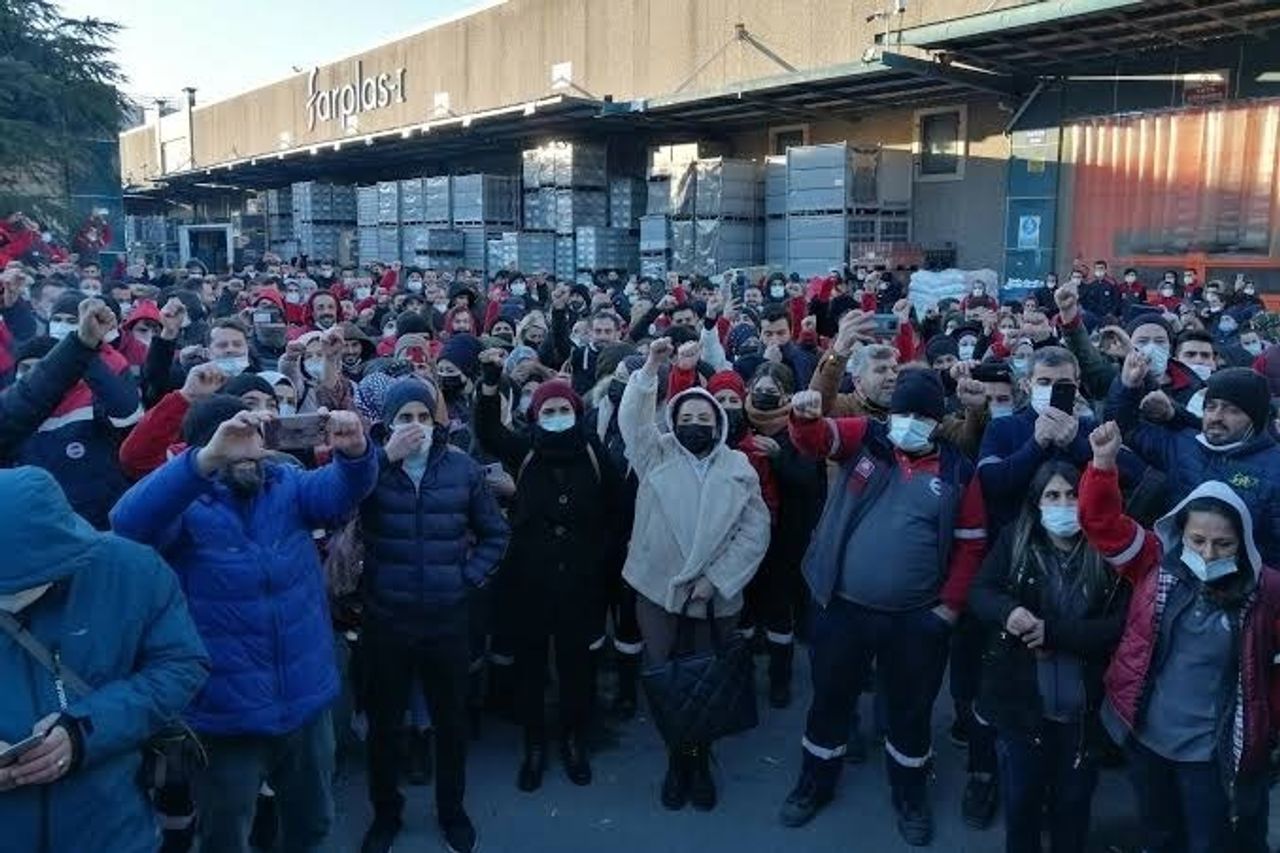 On August 5, workers at two factories of auto parts maker Standart Profil in Düzce and Manisa went on wildcat strikes and occupied their workplaces, demanding an additional raise and safe working conditions. After the strike, Düzce Mayor Faruk Özlü of the ruling Justice and Development Party (AKP) threatened the workers saying: “[T]its illegal action is so serious that you risk losing all your legal rights before the law.

More than 2,000 workers joined the walkouts, which ended on August 9 after the company accepted workers’ demands. As a result, management will give the workers another 28% wage increase, a 1,500 Turkish Lira (TL) voucher and take occupational health and safety measures.

The wildcat strikes at Standard Profil took place against a backdrop of growing working class anger and struggles in Turkey and around the world against the steadily rising cost of living and falling real wages. Official annual inflation in Turkey reached 79.6% in July. The Inflation Research Group (ENAG), an independent research organization, calculated annual inflation at 176%.

The management is cutting the real wages of the workers, who constitute the overwhelming majority of the Turkish population, by granting them increases well below the level of inflation.

According to a report by the pro-government Türk-İş confederation, the poverty line for a family of four rose to 22,280 TL ($1,240) and the hunger line to 6,840 lira ($380) in July . The minimum wage is only 5,500 lire. According to a survey by the Consumer Rights Association, 90% of the population now lives below the poverty line.

This unprecedented impoverishment actually means a massive transfer of wealth from the working class to finance capital. According to the calculations of Professor Dr. Şenol Babuşcu, while the profits of the country’s banking sector in the first six months of 2021 were 34 billion liras, profits in the first six months of 2022 soared by 401 % to reach 169 billion lire.

Faced with the social counter-revolution of the ruling class, which has intensified after the pandemic and the war in Ukraine, workers are increasingly fighting for better wages and living conditions. These workers’ struggles include:

 At the Salcomp Xiaomi electronics factory in Istanbul, 400 workers were fired with the collaboration of the Türk-İş affiliate Türk-Metal union when the union rejected their strike demand. When the workers did not receive the promised compensation, they occupied the factory on August 3 and then staged a protest in front of the Turkish metalworkers’ union.

 Workers at the Techomix electronics factory in Bursa, members of Türk Metal, went on strike on 5 August.

 Amid a wave of wildcat strikes by Amazon workers in the UK, Turkish Amazon workers who were fired for being members of DGD-SEN, a union independent of major confederations, began a demonstration on August 8 in front of Ceva Lojistik, the Turkish Amazon union. warehouse in Dilovasi, Kocaeli. The warehouse employs about 3,000 workers, who earn only 100 lira above the minimum wage of 5,500 TL. Around 600 workers collected signatures demanding better wages and working conditions. Along with wages, workers demanded action against oppression and lack of rules, and to defend worker health and safety, services and meals. The company responded by sending workers to other warehouses.

 On August 10, YDA Group workers at the construction site of a financial center in Ataşehir, Istanbul, started a protest at the company headquarters to demand their severance pay, notice and unpaid wages. Workers staged a march the next day and a journalist covering the protest was arrested by police.

 At Er Prefabrik in Manisa, 80 workers walked out on Thursday after the company gave them a 30% pay rise in response to their demand for a 45% raise.

 “Health and home care workers” from the Republican People’s Party (CHP)-led Izmir Metropolitan Municipality have been protesting outside the City Hall for two weeks, demanding their reinstatement. On August 8, protesting workers were attacked by police and security personnel.

 Sanitation workers in the CHP-run Beylikdüzü municipality in Istanbul staged a two-hour warning wildcat strike on Saturday after their demands for an additional pay rise were not met.

 In the municipality of Kartal under CHP administration in Istanbul, workers were offered a 40% increase from the previous minimum wage of 4,250 lira. The workers rejected this miserable offer, and later they rejected another offer for a 50% raise.

Speaking to the press, the workers criticized both the CHP and the DISK-affiliated Genel-İş union, which is led by pseudo-left groups together with the CHP. A worker said of the CHP: “Are the so-called social-democratic CHP municipalities, who say they are marching to power, going to march to power leaving their workers below the starvation line? He said that two months ago a worker from Kartal municipality committed suicide due to economic hardship.

The fact that a worker pointed out that the union “has no strike fund”, i.e. workers who go on strike are not paid, underlines the need for workers to establish committees base and take control of the strike fund that belongs to them.

Genel-İş recently betrayed several municipal employees. In 2021, strikes in Kadıköy and Maltepe municipalities in Istanbul were sold by DİSK and Genel-Iş. Last March, the same union refused to implement the strike decision taken by the workers of the municipality of Seyhan in Adana and signed a contract soon after. In the municipality of Çukurova, the decision to strike was canceled the day it was taken.

The wave of strikes in Turkey is part of a growing movement of the international working class against capitalism. After mass protests and strikes in Sri Lanka forced the president to resign, ruling classes around the world, including in Turkey, fear similar social explosions in their own country. The entire bourgeois political establishment aims to deflect the growing anger of workers, while the unions do all they can to suppress the class struggle.

The way forward for workers is to organize rank-and-file committees independent of pro-capitalist union bureaucracies. The International Alliance of Rank and File Committee Workers (IWA-RFC) launched by the International Committee of the Fourth International fights to unite and mobilize the objectively developing movement of the international working class against capitalism. It must be built in every factory and workplace around the world.

Rakesh Jhunjhunwala, the cheerleader of Indian markets and an invaluable friend